It was just before 5 p.m. on a Friday and Yuriko Hagen had already donned her double-breasted chef’s jacket. Her sushi bar was neatly arranged with red teriyaki dishes and sheathed chopsticks, all set against a contrasting black tray.

Behind the glass, a dozen cuts of tuna, salmon, tilapia, eel, urchin and crab were prepared for selection, their unique colors illuminated under the glow of a lamp.

This has been Hagen’s home away from home for nearly 16 years.

“I’m not really social, so it’s hard for me to start conversation, but I love it when the customers talk to me and ask me about the food and tell me how the food is good,” said Hagen. “That’s my joy, to do the restaurant business.”

Hagen was born in the city of Hakodate, located half a world away in Japan’s Hokkaido prefecture. It was there, back around the turn of the 21st century, that she met her husband, Floyd, as he was teaching English.

The two were married in Sapporo before Floyd, homesick for Montana, brought the couple to Missoula. It’s here, perhaps, where Hagen’s American story begins, and where Sushi Hana, the fabled downtown restaurant, would find a new beginning.

It’s also where Hagen got her first Montana job as a dishwasher.

“Right after I moved to Missoula, I could speak English okay, but I was not good with speech,” Hagen said. “People speak really fast and use lots of slang words, so it was hard for me to understand. I was kind of concerned about what to do here in Missoula.”

The couple lived two blocks off Higgins Avenue and Sushi Hana, then under the ownership of Chris Nagata, served as a tempting beacon for a Japanese woman struggling to adjust to her new surroundings.

Hungry for work, she inquired within and was hired as the restaurant’s dishwasher.

“There was one sushi place, one Japanese restaurant, and this was the only chance I thought I had to be hired,” Hagen said. “Chris Nagata was very, very nice. I was super homesick for a while. He helped me, encouraged me, and I learned a lot from him.” 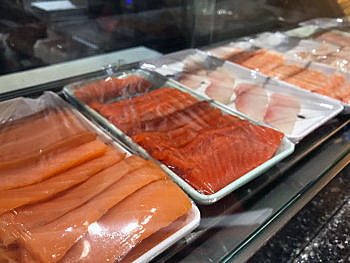 Hagen would work under Nagata’s tutelage for nearly 10 years. And while she began by washing dishes, her dedication to the job and her love for the business moved her out from the restaurant’s back end to its bustling floor and, soon, its aromatic kitchen.

“Not only did I learn how to make sushi and how to do (Nagata’s) food, but I think I learned how to work with people,” Hagen said. “His wife, Eva, was really helpful. When I was depressed, they asked me to teach them Japanese. I think they were not into learning, but were doing it for me, because they wanted to cheer me up.”

While growing up in Japan, Hagen had grown accustomed to making sushi with her mother. But while the fundamentals were the same in Montana – it’s the same sushi – preparing the food “American” style while holding true to her Japanese heritage would take some time and creativity to address.

“To change the Japanese way to the American way, it’s very interesting,” Hagen said. “It’s the same sushi, but it’s not the same. Japan is more simple, the eating style, with the fish on top and not too many rolls. In America, so many rolls, so flashy, like birthday cake.”

Sushi Hana originally opened in 1998 and was, at the time, the first sushi bar and Japanese restaurant to open in Montana. Hagen is proud of the restaurant’s history and its role in diversifying the city’s culinary offerings.

But along the way, she has placed her personal stamp on the business by tweaking its menu. From makizushi specials such as tempura soft-shell crab and unagi cucumber rolls wrapped in fish, to traditional nagiri dishes like red tuna, squid and sea urchin roe, she works to blend American expectations with traditional Japan.

It’s a fine line when serving a dish that was strange to many Missoulians in 2002 when Hagen first arrived in the city and went to work washing dishes in the restaurant she would later own.

“I don’t want to go too much toward birthday-cake-style, but I want to keep the Japanese style and somehow make it how American people like it,” Hagen said. “I can’t go straight authentic. I want sushi beginners to start liking sushi too. I have to be creative.”