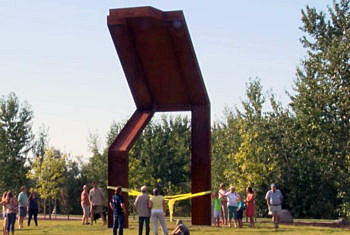 When George Ybarra completed his steel sculpture in Silver Park two years ago, he looked upon the monumental piece with a sense of pride. But even so, it was never fully finished due to lack of funds.

On Thursday, the Missoula Redevelopment Agency’s Board of Directors approved up to $25,000 to complete the sculpture by funding a lighting project to give “Perseverance” a presence after dark.

“This has become a favorite place to read and sit around, right at the base of that structure,” said Chris Behan, assistant MRA director. “There simply aren’t that many sources of funding for public art. It falls to MRA, and we’ve financed virtually all the public art in the downtown area, and it has made a difference.”

Ybarra envisioned the towering sculpture 20 years before he ever applied his torch to the structure’s steel during construction in 2015.

At 28 feet tall, the sculpture has been viewed in many ways and with an equal number of words, though Ybarra sticks with “Perseverance and Passage.” It remains the tallest piece of public art in the city, thought it all but vanishes after dark.

“Since we installed it, the steel has aged, which has put a weather coating on the steel,” said Ybarra. “As the years continue, the steel erosion on the surface will only enhance, which puts us where we are right now and that’s to get some lights to showcase the artwork a little better.”

The city’s Public Art Committee has tried without success to land grant money from the Montana Department of Commerce’s tourism arm to install the lighting. And with funding not available in other city departments, the task fell to MRA.

Committee member and lighting designer Jason DeCunzo also stepped in to help, working in part on a pro-bono basis. Supporters have already won lighting approval from the city and DeCunzo is ready to move forward with his illumination plan.

“We want it to be functional, so at night people are drawn to it and it enhances the gathering environment that Silver Park is,” said DeCunzo. “It’s up-lighting, but it’s been very carefully controlled so that it’s not displaying anywhere outside the sculpture itself.”

DeCunzo said the lighting will include efficient LED lights. Their arrangement will adhere to the city’s Dark Skies ordinance and make the sculpture visible as a landmark.

“It’s not a glare source, but as you look across the cityscape, you know exactly where that artwork is,” he said. “The lighting is soft, it’s even and it’s colored. It’ll enhance the warm tones of the piece.”

Todd Peterson with the Silver Park committee said DeCunzo’s willingness to spearhead the project on a pro-bono basis, including design and permitting work, helped bring the lighting to fruition.

“This will be the first project with a focused lighting component in the city,” Peterson said. “We’ve got quite a few pieces out there, but none are consciously light. This is a great opportunity for us to move ahead with that. I’d like to see more of hat in the future.”