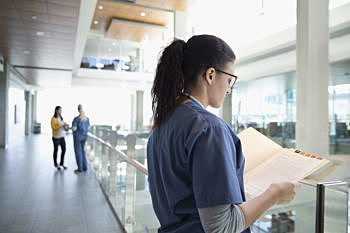 The days are long past when the only career doors that readily opened to young women were those marked teacher, secretary or nurse. Yet young adults who are part of the millennial generation are nearly twice as likely as baby boomers were to choose the nursing profession, according to a recent study.

“There’s no perfect answer,” said David Auerbach, an external adjunct faculty member at Montana State University’s College of Nursing and the lead author of the study, which was published this month in Health Affairs.

The trend could be associated with economic factors, he said. Millennials came of age during a period of deep economic uncertainty with the Great Recession, which began in 2007, and the nursing profession generally offers stable earnings and low unemployment.

In addition, researchers have teased out generational characteristics that might make nursing more attractive to millennials.

“These people are looking for more meaningful work and work that they care about,” Auerbach said.

One thing that hasn’t changed since the 1950s: Nursing is still dominated by women. In 2017, women made up at least 83 percent of registered nurses and licensed practical nurses, according to data from the Kaiser Family Foundation. (Kaiser Health News is an editorially independent program of the foundation.)

For the study, researchers analyzed Census Bureau data on 429,585 registered nurses from 1979 to 2015. The study excluded data on advanced practice nurses.

The study found that the number of new entrants into the field has plateaued in recent years. Still, the millennial generation’s embrace of the nursing profession should nearly compensate for the retirement of baby boomer nurses over the next dozen years and may help avert shortages, according to the researchers.

Many factors will influence whether the supply of nurses is adequate in coming years. The health care needs of an aging population is only one of them.

“The growth in accountable care organizations and alternative payment models is probably the biggest factor,” Auerbach said. For example, as hospitals move away from fee-for-service medicine toward models that pay based on quality and cost effectiveness, nurses’ roles may shift, and fewer of them may be needed in hospital settings as inpatient care declines.

Please visit khn.org/columnists to send comments or ideas for future topics for the Insuring Your Health column.