A downtown project cleared another hurdle on Wednesday with the Missoula Redevelopment Agency’s approval of several complex agreements guiding the construction and use of an $80 million hotel and conference center.

The series of agreements, which also include a component of public parking beneath the facility, will go to the City Council for final approval, marking a big step forward in a project now years in the making.

“We’re finally at the starting gate,” said Chris Behan, executive director of the MRA. “If the City Council signs these things, we’re off and running, but there’s a whole lot of work to be done before we get across the finish line. This allows the developer to spend as much as $2 million on design and engineering to get the point where they know if they have a project or not.”

The project traces its roots back nearly 30 years when the Mann Corporation donated to the city what’s become known as the Fox site, located on the corner of Orange and Front streets. Over the past decade, the city has sought a visionary developer to redevelop the property.

It found that developer in Hotel Fox Partners, a coalition comprised in part by Farran Realty Partners of Missoula. The plan started with a hotel and smaller conference center, though the vision has since expanded in scale and presentation.

It now includes a multi-phased development that includes a 195-room hotel and a 60,000-square-foot conference center. Future phases include housing, office space, retail and parking, with a build-out estimated north of $150 million.

“We’re talking about this being a kickoff project to a larger multi-phase development that includes housing at all (income) levels, more retail, more parking and offices,” said Jeff Crouch with CTA Architects. “We have all of that coming as well.”

As outlined in the agreements approved Wednesday, Hotel Fox will purchase the Fox site from the city and construct a seven-story hotel. The developers will also construct a 60,000-square-foot conference center attached to the hotel, along with a 405-stall parking garage located below.

Above the hotel, three stories of residential condominiums will be constructed and sold to private owners.

“As design progresses, we’ll know a lot more details with regard to what exactly that dollar amount will be,” said Dan Semmens, the city’s bond council and legal representative with Dorsey & Whitney. “It will be finalized by an addendum in the development agreement on or before the date of the construction financing the developers will enter in to.”

After purchasing the conference center from the developers, the city would then lease it back to the hotel, which would be responsible for upkeep, maintenance and booking events.

Ellen Buchanan, director of MRA, said the city is currently working with the Montana Department of Revenue to understand the taxable value of new and planned projects within the district. That will partially determine what the city can pay for the center.

“We know how much has been approved for the Stockman Bank project for public improvements made and there will be residual from that,” Buchanan said. “We’ve calculated what we think that can bring to the table and we’ve run the numbers on what we think the increment will be from the conference center and the portion of parking there that will be private.” 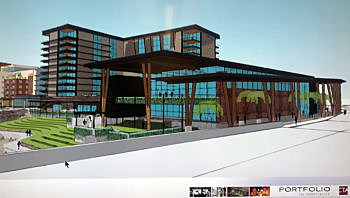 Under the agreements approved Wednesday, the city will also purchase 309 units of public parking in the underground structure. The 405-stall garage will also include 96 private spaces.

Despite the project’s initial complexities, experts on both sides believe it will serve as an economic catalyst to the larger Missoula community, landing major events the city could not otherwise get. With events capable of hosting 1,000 dinner guests, it could also help fill hotel rooms across the city.

A study conducted by the national planning firm Conventions Sports and Leisure estimated the Missoula conference center would bring $14 million in direct economic impact to the community each year.

“That study estimated 100,000 distinct visitors to this community as a result of this facility per year,” said Crouch. “Those are big numbers and the ripple effect across the community could be significant.”

During construction, the hotel and conference center is expected to generate nearly 1,000 jobs.