The city of Missoula was awash in building permits at the close of 2016 – a record-setting year that saw permits valued at nearly $245 million. Even the director of Development Services didn’t think that figure would be topped.

The wave of development sweeping across Missoula continued in earnest through 2017, a year that topped last year’s figure by $10 million, even as the number of building permits issued decreased by 115.

“We’re continuing to see a healthy pace of development activity across the board,” said Mike Haynes, director of Development Services. “I’ll be interested to see what 2018 holds.”

Several sizable projects are expected to break ground in 2018, including a new Missoula County Public Library and a hotel and conference center planned for the Riverfront Triangle on the western edge of downtown.

This project includes nine buildings, completing an additional phase to the workforce housing project west of Reserve Street. Once finished, the entire project will include 12 buildings totaling 330 housing units.

The overhaul of the historic Missoula high school represents one of the largest bond projects within Missoula County Public Schools. The project includes moving the library and admin offices, along with other renovation efforts. The work also includes a list of deferred maintenance, including boiler work and roofing. 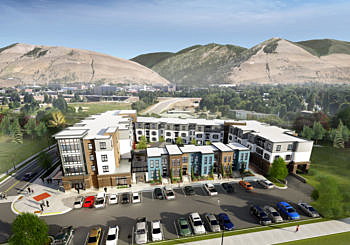 This ain’t your grandfather’s college dorm. The boutique student housing project is designed with the modern student in mind. Located in the Old Sawmill District, the project includes 57 housing unit offering 218 bedrooms. Each pod-style apartment features fully furnished bedrooms with private bathrooms, a common living area, kitchen, and a washer and dryer.

Thanks to a gift from the Dennis and Phyllis Washington Foundation, the University of Montana will construct an addition to the education center. Three stories tall, the project will provide 35,000 square feet of instructional space and include a 500 seat auditorium – the largest on campus. The project is slated for completion this time next year.

Hellgate Elementary School finds itself in one of Missoula’s fastest growing districts and, as a result, voters saw the need for more room. Backed by the passage of a bond, the district is building a new middle school and will make other improvements to the property to enhance the safety of its growing student population, which has increased year-over-year and could reach 1,800 in the next five years.

After a dose on controversy and red tape in local committees, developers received the green light to begin building a new five-story hotel on the corner of Main Street and Higgins Avenue in downtown Missoula. The project, which carries a total price tag of roughly $37 million, includes 177 rooms, a pool on the second floor, ground-floor dining and retail, and a public museum honoring the site’s history. 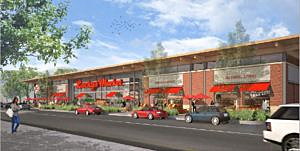 It used to be a Sears store, but the red brick facade outside Southgate Mall is undergoing a transformation into a national grocery store. Lucky’s, which will join the AMC dine-in theater in a spring opening, promotes itself a specialty chain that features natural, organic and locally grown products.