After two years of planning and investment, developers behind a proposed subdivision off Reserve Street made their final pitch Wednesday to members of the Missoula City Council, which is set to vote on the project next Monday.

The Grove Street Townhomes development has seen several months of public hearings and is opposed by nearby residents. A two-thirds vote of the City Council will be required to overcome the protest petition signed by property owners.

“We’ve done the best we can, and we’ve worked with the city for two years trying to put this together,” said Frank Kolendich, whose family has owned the property for more than a century. “I don’t have a Plan B at this point. We’ve put a lot of time and effort into it.”

The development, introduced as a townhome exemption planned just west of Reserve Street, clusters 15 two-unit townhomes and one detached unit on 4.4 acres. It also preserves 6.19 acres as open space, along with a half-acre park.

The city’s Development Services has recommended the project for approval, saying it meets a number of city goals, including the clustering of homes to preserve open space. The city has already put a number of conditions on the project.

“The housing is clustered closer to Grove Street and preserves open space closer to the Clark Fork River and near the railroad right of way,” said city planner Mary McRea. “The overall density with this annexation and zoning is just over three dwelling units per acre.”

Paul Forstein with Territorial Landworks believes the townhomes fit the neighborhood well. He noted other nearby properties, including a number of multi-family structures and recent subdivisions, in making his point.

The neighborhood represents a blend of housing types and incomes, he added.

“The approximate cost for each unit is going to be $300,000,” Forstein said. “That’s the going rate for houses when you have to build all the infrastructure. Is that attainable housing? Probably not for most folks, but having units in the inventory is something that’s in demand right now.”

As many as 59 neighboring residents have a signed a petition opposing the project, mostly over concerns regarding design and impacts to existing properties. Several residents believe the homes are too big and don’t fit with the neighborhood’s character.

“Density is one of the issues,” said Jim Betty, who said he’s representing those who signed the petition. “This is going to be 15 large duplexes. It’s not compatible just in their size and scope. We’re offended by the gross size of these houses and the density.” 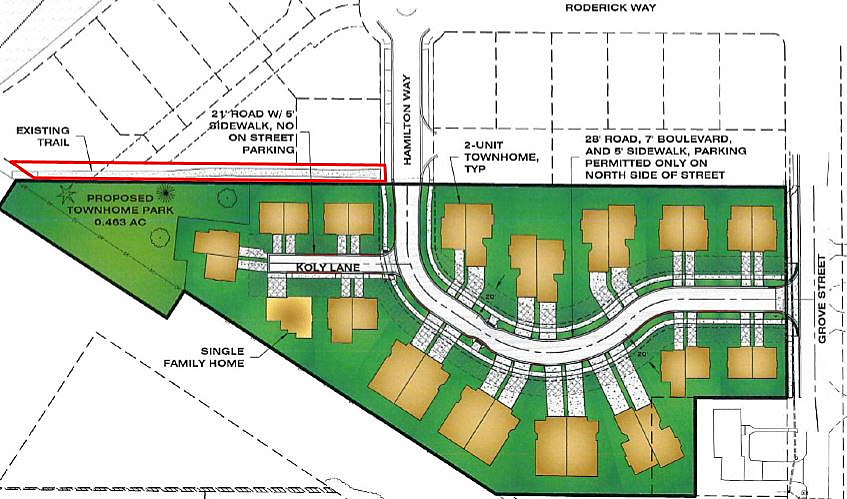 Kolendich said his parents purchased the property in 1918 after leaving the Butte mines. They made sacrifices over the years to keep the property in the family and made a living selling produce around Missoula.

More than a decade ago, the city began sending letters asking if the the property could be sold to solidify open space and extend a popular bike trail along the old Milwaukee railroad line. The family initially said no, up until three years ago.

Now the family has agreed to set a portion aside for city open space, and Kolendich said the original appraisal value still stands, even though it’s now several years old.

“I fully understand the people who really don’t want this to happen. When they put their subdivision in, I felt exactly the same way. But you always assume the worst, and it’s never really as bad as you think it might be. We feel the townhouses are an improvement to this area.”

The City Council will vote on the proposal Monday night.