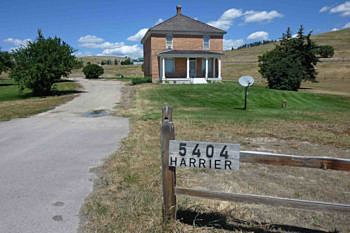 A member of the Energy Corps will take up residence at the historic LeLonde Ranch this year while the county completes a study on the property and considers its future.

On Thursday, commissioners approved a temporary rental and caretaker agreement with Elliot Thompson, who’s expected to serve as the property’s caretaker through September.

“It’s an old ranch house, and while it’s in the middle of a development park, it’s also a little bit isolated,” said Dori Brownlow, director of the county’s development district. “We wanted to have a caretaker to take care of the lawn, make some minor repairs in the house, and to make sure it’s secure. Our previous caretaker moved.”

Commissioner Cola Rowley said the cost of housing in Missoula makes it difficult to attract Energy Corps members to serve in the community.

They get paid little, she said, and because the county is reluctant to leave the ranch vacant, having Thompson serve as caretaker during his Energy Corps service emerged as a reasonable, yet temporary solution.

“We don’t want something there long term, necessarily, because we don’t know what we’re going to do with the property,” said Rowley. “It was a good fit to provide a service to an Energy Corps member who’s serving our community as well as keep it from vandalism in the short term.”

The LeLonde Ranch remains one of the few historic agricultural properties left standing in the Missoula Valley. It consists of several buildings that include a log cabin dating back to 1877, when Adam LeLonde was “proving up” his land.

The precise date of the ranch house is unknown, though historians believe it was built after 1888 using materials from the Hollenbeck Brickyard, once located two miles south of the home.

Now the ranch and its remaining 7 acres are bounded on all sides by the county’s growing Development Park and Interstate 90. The park has been reserved for technology and industrial uses, and the county is exploring its options and the ranch’s future.

To move that process along, commissioners last November approved a $44,000 service contact with A&E Architects to assess the condition of the land and its buildings, and provide a cost estimate for improvements.

“We’re hoping to have a preliminary report done in March or June,” said Brownlow. “A&E is meeting with the Missoula Development Park board and some other interested people. At this point, they’re looking at the buildings and what it would cost to improve them to be available to public use.”

Commissioners on Thursday said they have no immediate plans for the property, thought they’ll weight their options once A&E complete’s its study.

“That’s why we’re doing this study, to look at our options more clearly as to what makes sense,” said Commissioner Jean Curtiss.