A filmmaker from Washington, D.C., and a group of Montana cowboys who still ride the range may not have much in common. But give them a few weeks together rounding up cattle in the Highwood Mountains and, as this story goes, they’ll form lasting bonds.

Film director Brian Liu is in the final stages of producing his new documentary, “Only Roundup Remains,” which he filmed over the course of several years riding the Highwood cattle roundup east of Great Falls.

Along the way, he got his footage and made some unlikely friends.

“I’d never ridden a horse before I went out,” Liu said on Monday. “I was humble about it and very upfront. I didn’t try to bullshit anyone. I told them if they gave me a quick lesson, I’d stay out of their way. They gave me a 30-second lesson and led me around the pen like a toddler on a pony, then sent me off into the Highwoods.”

Liu, a longtime designer and photojournalist from D.C. whose credits include the New York Times and Rolling Stone, was admittedly green when he arrived in Montana. His filmmaking partner, Andrew Labens, had family in the state and recommended the legendary roundup as a possible documentary.

Liu agreed to scout it out.

“I had no idea what I was getting myself into,” he said. “Me and Andrew were just setting out to see what would happen and maybe make a short. We ended up finishing that roundup and thought we had some pretty good footage, but we didn’t get around to it for a while.”

The following year, as Labens went to work on a hunting show in Cody, Wyoming, Liu’s phone began filling with text messages. It was the Highwood cowboys asking when he planned to come back out for another ride.

Liu was skeptical, saying he was dead weight, required two additional horses and, by the way, had made other plans. None of the cowboys asked where the film was in production. As it turns out, they simply liked Liu’s company.

“As a filmmaker and someone who’s into culture, I really was flattered by that, so I flew back out and continued shooting,” Liu said. “We were pretty pleased with the way everything looked, and we realized we might have a feature, which is really difficult to make.” 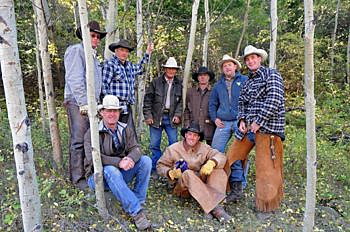 The Highwood roundup is something of legend, given that it’s been taking place each year since 1912. While its future remains uncertain, it still enjoys the dedication of eight men who set off each fall to gather several thousand cattle from 50,000 acres over the course of a week.

For the past several years, Liu has taken a horse-high seat to film the action.

“Somebody said, when they heard a film director was coming out from D.C., they didn’t expect a long-haired Asian guy wearing camo pants and a T-shirt,” Liu said. “They expected someone in a tie, and they weren’t expecting me. They didn’t think that a city guy could hang in there and drink with them.”

Liu described the documentary as a rare and intimate view into a disappearing way of life. Led by a proud generation of ranching families, the work takes place today just as it did in 1912.

“Our film is very much about a way of life, but it’s also a story about getting older, in general,” Liu said. “These old, tough guys are legends and you only heard stories about them. But to actually see them hanging in there at the age of 75, still chasing cows and still living the life, I just wanted to do justice to that life and these guys were so gracious to open up to me.”

With the footage complete and the editing done, Liu and Labens are working to secure the music licensing and are planning a Kickstarter campaign to fund it. The soundtrack includes Ramblin’ Jack Elliott doing Bob Dylan, along with Bill Callahan and Loudon Wainwright III.

They’re also busy applying to various film festivals, including next year’s Big Sky Documentary Film Festival in Missoula. Their hope is to tour the film across Montana, showing it in rural towns along the way.

“The last thing that remains of that Old World tradition where a cowboy is just a cowboy is the roundup,” said Liu. “People usually make documentaries about a subject they’re obsessed with. But I’m making this one to honor the life and the guys – their grandfathers and fathers before them who did this. Now their children and great-grandchildren can look at it see what their family did.”