After weeks of deconstruction, the old Arron’s store on Brooks Street went down quickly last week, clearing the way for site preparation and the construction of a new bank building.

Stockman Bank, which cut the ribbon on its new $35 million downtown facility in December, is set to break ground this spring on its new $15 million southside location, slated for the corner of Dore Lane and Brooks Street.

“Construction is set to begin around May of this year with a construction timeline of about 15 moths,” said Bob Burns, the bank’s Missoula market president. “It’ll be a three-story building. The bank will occupy the first and second floor, much like we do (downtown). We’ll be looking to lease the third floor to a potential tenant.”

Late last year, Stockman requested roughly $445,000 in tax increment financing to begin the project – an amount that included $121,000 for deconstruction and demolition costs, along with funding for utility work and pedestrian improvements.

While the property generated $56,000 in taxes, that will increase to more than $225,000 once Stockman’s new building goes on the tax rolls. Burns said the southside location opens new opportunities for the bank.

“It’s a growing area of Missoula with Upper Miller Creek and the growing number of rooftops in that vicinity,” he said. “That area of town is a gateway for the many people commuting from the Bitterroot Valley. There’s been a lot of great development throughout that Brooks Street corridor.” 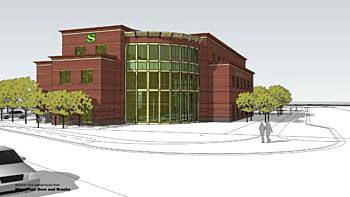 The once dilapidated property formerly housed the old Aaron’s store and a shuttered movie theater. Stockman took the theater down last spring at the request of the Missoula Police Department, which feared it was being used as a drug den.

The Arron’s store was deconstructed by Waste Less Works of Missoula earlier this month. Burns said site preparation is set to begin, followed by construction in May.

The bank also plans to sell an adjoining piece of property to the right buyer.

“After construction is complete, the current plan is to sell that piece of property, and preferably see something that compliments that bank,” Burns said. “With everything that’s going on with the mall, there’s a lot of activity happening in that area.”