Given those eye-opening figures and the 12 million visitors who flock to the state each year, Sheila Cornwell believes there’s enough money – and people – to go around.

“There’s just so much to do here,” Cornwell said. “People are really varied in what thy expect when they come here. But they leave having so much of a better idea of what this state is like than they ever did when they got here.”

With an eye on the state’s tourism economy and her love for the great outdoors, Cornwell left her desk job to launch Montana Adventure Shuttle. The upstart business endured its inaugural summer in 2017 – one of the smokiest in recent memory – though it did little to deter her dream of giving visitors a customized taste of Big Sky Country.

From kayaking trips on placid Montana lakes to tours of Missoula’s rich craft brewery scene, Cornwell is positioning herself as one of the region’s travel ambassadors. Her banner hangs at Missoula International Airport and her cards can be found in local hostels.

Her photo album is alive with memories of a Montana summer.

“One of my slogans is ‘endless roads, endless possibilities,’ ” Cornwell said. “It really does seem like there’s endless possibilities to enjoy yourself in this state. There’s really nice small towns to visit if you’re not into the outdoors. We have two national parks, hot springs and ghost towns.”

In explaining her path from desk jockey to the owner of a big white van and an upstart adventure business, Cornwell quotes John Muir who said, “The mountains are calling and I must go.”

That, she said, is “basically what happened,” and since it happened, she’s been working to build her adventure portfolio by growing local partnerships.

“I’ve recently partnered up with a biologists who’s also a photographer,” Cornwell said. “We’ve developed what I’m calling special guided tours. She’s the guide, and while we go through the National Bison Range, she comments on all the natural features and wildlife.” 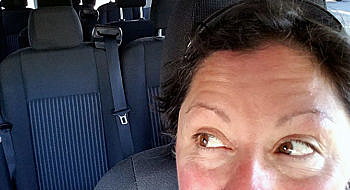 Other outings, including adventure photography and river shuttles are also in the works. The list already includes the Garden of One Thousands Buddhas, the Trail of Western History, tours of Missoula and special guided tours.

“The idea came from my insatiable need to travel,” Cornwell said. “I love Montana and I love to share it with people. I’ve found that in the 21 years I’ve lived here, I get a kick bragging about the state and showing it to people who have never been here.”

In something of a “chose-your-own adventure,” Cornwell also offers design-your-own-route tours, where the visitor sets the agenda. The purpose of the shuttle, she said, is to get the guests and their toys to Montana’s hot attractions.

It doesn’t matter if its a bicycle, kayak, tube or camera gear, she’s ride to offer a ride and offer a little local insight along the way.

“Jobs are developed from our passion, or should be,” Cornwell said. “I’m a nature girl, so getting people outdoors to enjoy all the things I’ve enjoyed all these years I’ve lived here is something I like to do. It’s getting them out there so they can feel the same experiences – seeing a moose or being on the water. I want to share that experience with people.”