A future Glacier Ice Rink proposed for the Missoula County Fairgrounds could include three hockey rinks, a curling lane and a restaurant, among other amenities, and would likely be constructed in phases, the facility’s architect said Friday.

The floor plans, designed by Minneapolis-based 292 Design Group, were included in a survey released this week to area stakeholders. A price estimate is expected in the coming weeks.

“We’ve pretty much settled on an overall master plan for the facility, which shows all the potential – the maximum – that could be done,” said Mark Wentzell, a partner with 292 Design Group. “We’re starting the imagery of what the building would look like, but we haven’t released that yet, and we’re working on a phasing plan. We understand the potential for Missoula to build all of this at once would be highly unlikely.”

While the design remains a work in progress – as does the cost – its release marks a big step forward in what’s been a multi-year process of envisioning and designing the fairgrounds’ future and that of Glacier Ice Rink.

Glacier Ice Rink teamed up with Missoula County in 2016 to complete a market study, which found the need for an expanded facility. Along with bringing outside visitors to Missoula, the study suggested, a new facility would offer users more ice time, and better pricing and playing times.

It also found that building a new rink would be cheaper than renovating the old one.

Last September, county commissioners approved a $39,000 contract to 292 Design Group to begin designing a new rink. The floor plans were released with a stakeholder survey, which suggested user feedback would help determine the final design, cost and potential phasing.

“We’ve been working on the cost estimate,” said Wentzell. “We had people from Missoula come in and look at some of the rinks we’ve done here (Minneapolis), so they understand some of the construction processes we’re using. We fully understand this is a multi-step process.” 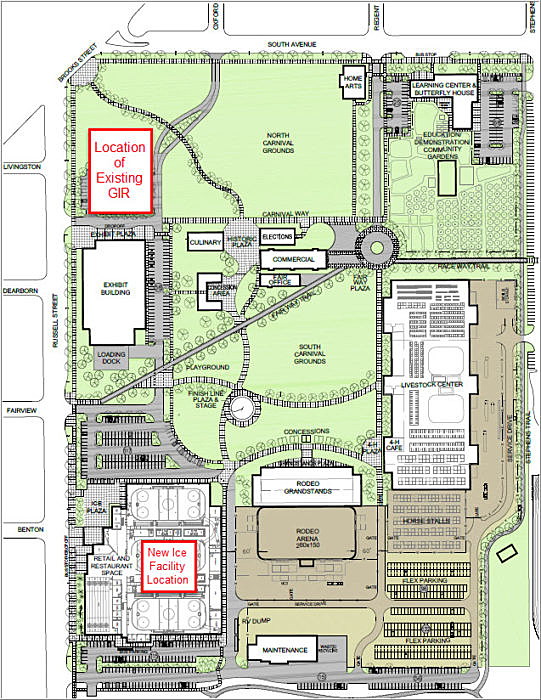 While fairgrounds director Emily Bentley couldn’t be reached for comment on Friday, she said last month that work on other projects at the fairgrounds would begin this year. She also has asked the county to create a special improvement district for the property to help pay for the work.

The county has already established 3 mills for the fairgrounds, which generate roughly $650,000 per year. But Bentley said the fairgrounds doesn’t want to spread that funding out over 20 years, and it’s looking to finance the property’s redevelopment sooner rather than later.

Some projects, including a new Glacier Ice Rink, would require additional public and private funding, and commissioners have already said that users of the ice rink must contribute to the project’s cost.

How much hasn’t been said, though the county will consider creating a special district later this month.

As that process plays out, Wentzell detailed the potential phasing of Glacier Ice Rink, starting with a practice rink with a limited amount of spectator seating. The center of the proposed structure includes a game rink with seating for an estimated 1,300 people.

The plan also envisions a covered outdoor rink, which could serve multiple purposes depending on the time of year. It also includes four curling lanes to accommodate users of the increasingly popular game.

The facility would also be relocated on the fairgrounds property. Plans now place it further south along Brooks Street, opening the fairgrounds’ northwest corner for open space.

“This is in the southwest in the corner in the fairgrounds,” Wentzell said. “It fits much better there than the northwest corner where we initially looked to put it. But it impinged on the rest of the fairgrounds so badly if we put it up there.”