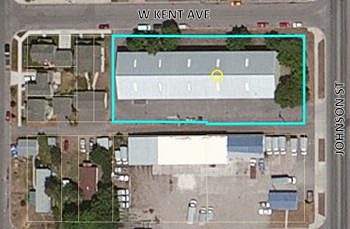 A developer is asking the Missoula City Council to approve his request to convert an existing building into an indoor mini-storage facility – a project described by the architect as a big box with a lot of little boxes inside.

The building was formerly used as a lumber storage facility at 2115 Johnson Street and sits across the street from what will become Montana Rail Link Park.

“One of the reasons this building was attractive to him is because it’s really stout,” said Erin Hanks of Gavin-Hanks Architects. “It gives him the opportunity to explore tempered or semi-heated spaces inside. We felt it was really important not to show this as a big, gray building.”

If approved at next week’s City Council meeting, the developer – Brian Walker – would make internal and external improvements to the structure, including landscaping and a new facade.

The property is currently zoned community commercial, requiring the owner to receive a conditional use permit to convert it to storage. Those conditions also include the addition of curb and gutter, and a sidewalk with ADA improvements.

The existing chain link fence with barbed wire will be removed.

“Right now we have no plans to fence the facility,” Hanks said. “The security happens at the building itself and acts as restricted at the door.”

Several members expressed concerns during Wednesday’s discussion, including the placement of the sidewalk and security. The storage units would be accessed from the inside.

“I’m stuck on it being a big building with no people,” said council member Heidi West. “As a woman, I can’t think of a more terrifying space to be in than a thing full of hallways and no people.”

Hanks said the developer has installed security cameras at his other facilities and would likely do the same at the Johnson Street project. The building includes 13,800 square feet and would be converted into 275 mini-storage units.

“The interior will be well lit with wide hallways,” Hanks said. “I know the other facilities he’s done have a lot of cameras and monitoring that takes place. They do come by and check it, even though there’s no on-site management.”