Renovations to the top two floors of the historic Florence Building in downtown Missoula are advancing on schedule – and revealing a few surprises along the way.

As it turns out, past renovations concealed part of the building’s past that are only now being revealed.

“When they did the original renovations, they literally just put up drywall over the bathroom in one of the hotel rooms, leaving everything down to the roll of toilet paper sealed in time behind the new wall,” said David Bell, president and CEO of ALPS, the building’s owner. “It was exposed again for the first time last week.”

ALPS, a national insurance company planning for growth, announced its intention earlier this year to renovate the top two floors of the Florence and move its office from the building’s second floor.

Reclamation work began in January with the salvaging of oak doors and trim and an assortment of hardware from office space last furnished in the 1980s. Portions of the structure date back to the building’s construction in the 1940s, including vintage mail chutes and Post Office boxes.

While the company remains fond of its historic digs, Bell said the work doesn’t come cheap.

“Maintaining a historic property is no small commitment,” he said. “We have reinvested any profit back into building improvements. Last year, we could have bought a plumbing company with the number of times we were plagued with pipe issues. Part of this project upgrades a considerable amount of the original 1940s’ pipe network.”

Since January, the staircase connecting the sixth and seventh floors has been removed. A new staircase built of rough wood and steel is planned, adding to the renovation’s “rustic modern” character.

Bell said a large skylight will also be cut in over the stairs and the reception area will include reclaimed wood from the old Missoula Mercantile – a tribute to the downtown district’s history.

The company hopes to occupy its new offices later this year.

“The project is running on time and roughly according to plan,” Bell said. “But I’ve learned two important lessons when dealing with a beautiful, historic building like this. First, surprises when walls are removed are inevitable and, second, surprises always seems to increase costs – and never the other way around.” 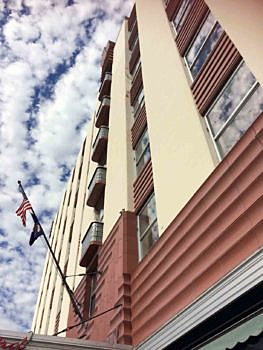 The first iteration of the Florence Building was constructed at the same location in 1888, but burned in 1913. Its replacement burned again in 1936. The current building dates to 1941 and still bears the Florence name – that being the wife of A.B. Hammond, who built the first hotel in 1888.

ALPS has owned the building for more than a decade and has already made several investments to restore the lobby to its original look. Last year, ALPS also repainted the building’s exterior, along with other improvements.

Bell said renovations to the top two floors will enable ALPS to embrace its future and grow its staff of 68 local employees.

“We’ll also be working on building improvements that will be more visible to Missoula visitors in our lobby,” Bell said. “We’ll refurbish the main entry doors on Higgins, replace furniture in the lobby with new leather pieces over time and fix the outdoor flag pole so that pays proper respect to our flag, along with a host of other punch list items.”