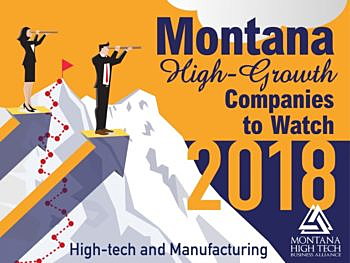 A Missoula tech company bootstrapped after its founding in 2014 saw revenue grow 300 percent last year, earning it a spot on this year’s list of high-growth companies in Montana to watch in 2018.

LumenAd, founded in a basement by Ryan Hansen, was one of three Missoula firms to make this year’s list, released annually by the Montana High Tech Business Alliance to promote the state’s growing startups.

“A lot of these companies we ended up featuring I’d never heard of before, until we started to compile this year’s list,” said Christina Henderson, the alliance’s executive director. “Some of these companies are still pretty new but are poised to grow really quickly.”

The alliance identified more than 570 high-tech and manufacturing firms across the state, though experts at Next Frontier Capital, Frontier Angels and Blackstone LaunchPad at the University of Montana, among others, narrowed the list to 12 finalists.

Henderson said the criteria included a firm’s position for growth, the experience of its management team and its plans to add jobs in 2018, among other factors.

“One of the challenges in economic development is identifying high-growth firms,” Henderson said. “While they’re having this out-sized economic impact, they can be very hard to find. They’re not necessarily mainstream businesses. They’re buried in industrial parks and downtown offices. They’re just quietly doing business.”

LumenAd deals in advertising technology with marketing agencies across the country. It’s set to hire its 50th employee this year, though it plans to grow to 100 employees by 2020, according to Hansen.

Satic USA – a solar and clean energy manufacturing firm based in Missoula – also made this year’s list, as did TOMIS, a marketing software company founded by Evan Tipton.

As of March 2018, TOMIS tripled its revenue over 2017 and anticipates further growth. It also plans to hire nine more employees this year, bringing its team to 35.

“TOMIS and LumenAd are scaling up and adding a lot of jobs in a variety of positions,” Henderson said. “The tech engine in Missoula is definitely running. With ClassPass coming in, it’ll keep growing. This industry isn’t slowing down any time soon.”