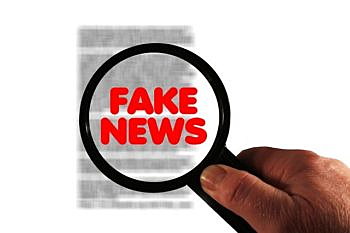 (Courthouse News Service) – Most Americans say they would prefer tech companies take the lead in stopping the spread of misinformation online instead of the government, even if it would limit their freedom to access and publish information, the Pew Research Center reported Thursday.

The results of Pew’s survey comes as Americans grapple with Russian interference in the 2016 general election and concerns about continued meddling in this year’s midterms. Investigators believe Russian operatives used social media platforms, including Twitter and Facebook, to spread fake news stories and sow partisan divides to influence the last presidential election in favor of Donald Trump.

Americans remain somewhat divided on how best to tackle the issue and curtail the spread of fake news online. Fifty-eight percent of respondents in the Pew survey said they would resist government efforts to restrict misinformation even if that meant it might be disseminated online.

In contrast, 39 percent said they would prefer the government place limits on false information, even if it restricted their freedom online.

When researchers asked Americans the same question about tech companies, the results shifted. Fifty-six percent of U.S. adults were in favor of tech companies taking action, even if it created limits. Forty-two percent would rather the tech companies do nothing.

“The ﬁndings highlight a tension in the United States between the public’s sense that misinformation online is a problem and the long-held belief in the right to freely access and publish the information one desires,” Amy Mitchell, Pew’s director of journalism research, said in a statement.

Younger Americans between the ages of 18 and 29 were more likely to be resistant to action by both the government and tech companies, with 65 percent preferring no limits to curtailing the spread of misinformation if those efforts came from the government, and 42 percent if tech companies led those efforts. By contrast, older Americans were more likely to favor online restrictions.