If the state of Montana converted to electric buses, it would reduce greenhouse gas emissions by more than 45,000 tons each year, an amount that’s equivalent to removing 8,500 cars from the road.

That figure, released Tuesday as part of a new study by Environment Montana, includes emissions generated from making the electricity needed to power those buses, according to Skye Borden, the organization’s director of research and policy.

“The state is receiving $12.6 million as part of the Volkswagen settlement,” said Borden. “A smart use of those funds would be to consider the feasibility of adding more electric buses and charging infrastructure – anything to promote electric vehicle usage in individual cars or mass transit.”

Early last year, the U.S. and the state of California filed a lawsuit against Volkswagen, alleging its diesel cars cheated on emissions tests. The resulting $15.7 billion settlement included $2 billion for investments in zero-emission vehicles and infrastructure, and $2.9 billion to establish an Environmental Mitigation Trust.

As part of the settlement, Montana received $12.6 million from the mitigation trust to curb nitrogen oxide emissions in the transportation sector. Mountain Line is keeping tabs on the state’s share of those funds.

“We’re aware of the Volkswagen settlement and we’re keeping abreast of the developments of that process,” said Bill Pfeiffer, Mountain Line’s community outreach coordinator. “We’re hoping to try to leverage more of those funds should it become possible in the future to encourage the transition of our fleet.”

While the funds could help Mountain Line achieve its goals of going emissions free, the organization is already taking steps to do so. It will take delivery of three electric buses next spring, followed by three additional electric buses in 2020.

“Our board is committed to transition our fleet to a zero-emission fleet in the coming years,” said Pfeiffer. “These benefits will be expanded in the future through greater efficiency and better use of energy in the long run.” 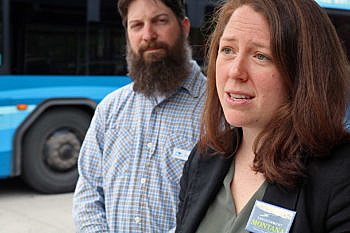 Pfeiffer and Borden discussed the efficiency of today’s electric bus technology outside Mountain Line’s downtown transfer station on Tuesday. The agency’s fleet of diesel buses, lining up before the noon rush, average just 4 miles per gallon.

By comparison, electric buses now on the market average over 17 miles per diesel-gallon equivalent. While they bear a greater upfront cost, Pfeiffer said, the fuel savings – estimated at $81,000 over 12 years – helps compensate for the difference in purchase price.

With six electric buses slated to hit Mountain Line’s fleet in the next two years, the fuel savings will amount to roughly $486,000, freeing up funding for other improvements to the system while cutting vast amounts of greenhouse gas emissions.

The first three buses Mountain Line stands to receive next spring are funded by a Low-No Zero Emission grant from the Federal Transit Administration. The agency also received $2.7 million in a bus and bus facilities grant, also from the FTA.

“Those funds will be going to purchase additional electric buses, as well as making stop upgrades to the two most frequently used routes in our system,” Pfeiffer said. “It will also allow us to make bus- stop sign upgrades across our entire system.”

Borden said other states are making headway in converting both school and transit buses to electric. The states of California, Minnesota and Massachusetts have launched a pilot program to convert to electric school buses, while the mayors of Seattle and Los Angeles have joined a pact with 10 other mayors to purchase only electric transit buses after 2025.

Depending on what Montana does with its settlement funds, the state’s largest mass transit system in Mountain Line could move closer to replacing its diesel fleet. The only electric buses currently in Montana are operated by UDASH at the University of Montana.

“Our report identifies several ways we can pay for the acceleration to all-electric school and transit buses here in Montana, including the Volkswagen settlement funds, state and federal grants, and utility investments,” said Borden. “We hope that a portion of the Volkswagen money will be used to purchase all-electric buses and charging infrastructure.”