The first question facing Nick Caras when looking at the old Radio Central Building in downtown Missoula was whether or not he should pull the trigger and make the purchase.

Now that he has, the second question is whether to reveal the building’s 1890s architecture, or restore the mid-century facade with all its space-race appeal.

“I do actually like the mid-century look and think there are ways to clean it up and spruce it up and pay respect to that era,” said Caras, president of Agridion Development. “The Radio Central Building is very much part of that rocketeer, 1950s space-race deal. But I like the 1900s history as well.”

Caras closed on the Radio Central Building – aka the Union Block – on Front Street in February and is now deep into an interior remodel. The old drop ceilings are gone, revealing towering heights and the structure’s thick wooden beams and vintage brick walls.

During the deconstruction, crews also revealed a number of hidden surprises, including vintage candy wrappers, an old Quaker Oil sign and wallpaper pasted up through more than a century of use and reuse.

“We didn’t intend to remodel on this scale,” Caras said. “Our plan was to pull up the old carpet and paint. But we found all this cool stuff and started exposing all these brick walls. It was a great location and a really cool building.”

Old city maps show the building as “being built” in 1893. Many of the properties on that edge of the city were still vacant at the time, or contained smaller structures, according to the maps.

By 1893, however, maps identify Caras’ building as the Union Block, and early renderings reveal Queen Anne architecture similar to the Higgins Block on the corner of Front Street and Higgins Avenue – a building commissioned in 1889 by C.P. Higgins.

“Our development plan is to work on this and restore this building where it needs it – the brick pointing and cleaning it up,” Caras said. “It needs some love. But one of our big decisions is what we’re going to do with the facade and whether we’re going to try and restore it to the 1900s look or clean it up to the mid-century look and make it a little nicer.” 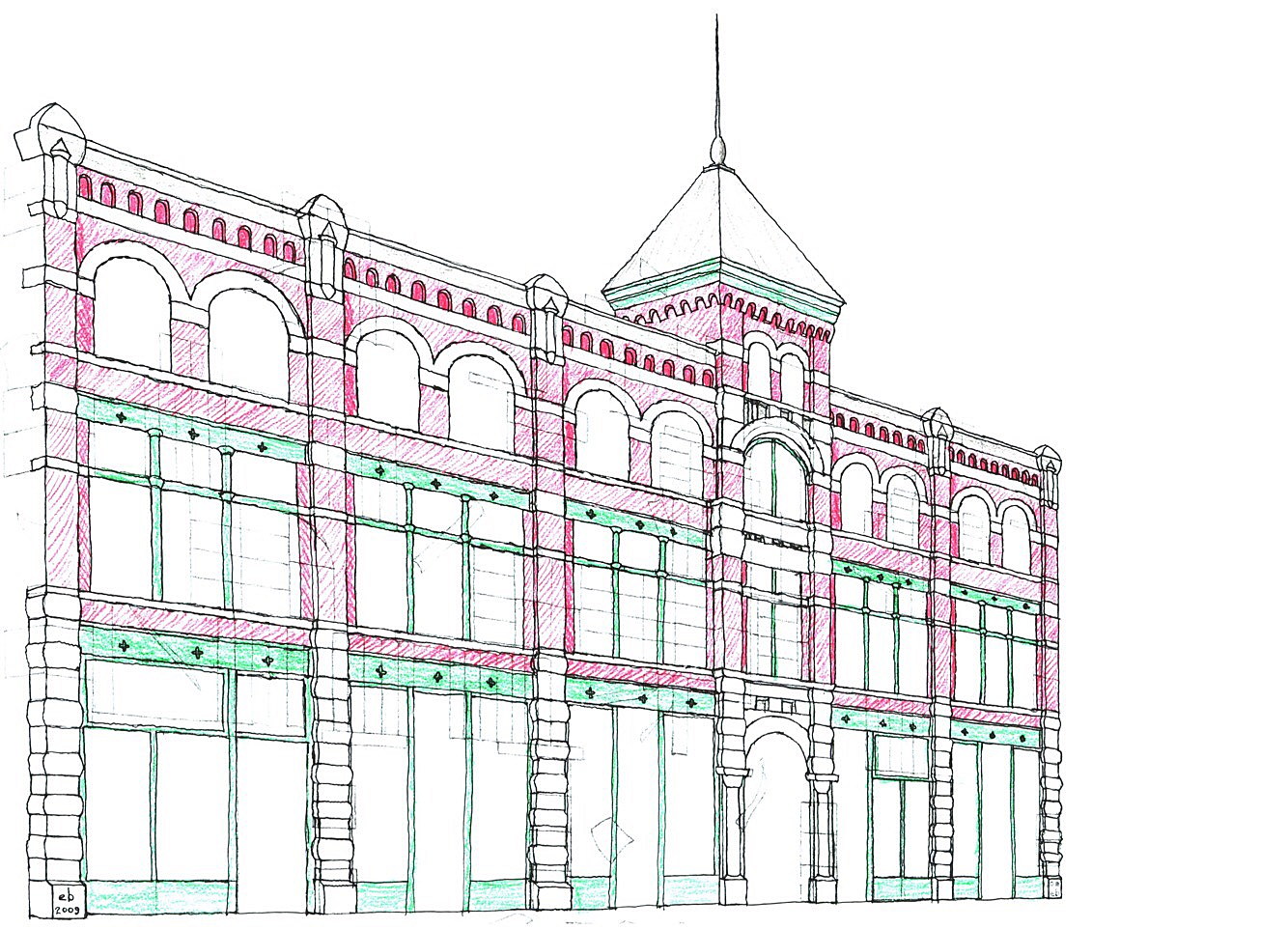 While the Union Block has the stature of a four-story building, it actually covers three floors and 24,000 square feet. The upper floor is currently occupied by office tenants and the ground floor includes several retailers. The second floor is currently gutted and went on the market recently for lease as office space.

The structure was listed at $2.25 million.

Over the years, Caras said, the building has served a number of uses, including apartments, which may explain the odd array of wallpaper, from whimsical figures fit for a child’s room to gaudy flower patterns cast in equally gaudy colors.

“This was actually the second run I made at buying it,” Caras said. “I put an offer in a couple of years ago. I’m glutton for punishment, I guess. But it’s been fun doing the Hammond Arcade and I love old buildings. They have a lot of character and are attractive to tenants. We just don’t build things like this anymore.”

“I grew up here and lived downtown for a couple of years and I’d like to move back,” he said. “I love the restaurants and the people downtown. From a business perspective, the district has a lot of momentum and people are going to continue to want to work and live downtown. It’s a good location for our portfolio.”

The district’s history isn’t lost on Caras, whose grandfather arrived in Missoula as a Greek immigrant in 1905. The Union Block was standing at the time, and chances are good that his grandfather cast eyes on the structure, if he didn’t shop in the building’s stores – or the Mercantile, which sat across the alley up until last year.

As Caras tells it, his great grandfather, James, started selling fruit and flowers from a cart outside the old Fox Theater. He grew flowers at the Caras Nursery, which also evolved. The business split within the family, one being Caras Nursery and the other being Garden City Floral.

Chances are also good that Caras’ early family members tuned in to one of the radio stations that used to broadcast from the Union Block – back when it became known to most modern Missoulians as the Radio Central Building.

“KGVO was here and KOSKI radio,” Caras said. “Round the middle part of the century, KOSKI radio was here and had a big radio tower on top. If we keep the mid-century look, it would be cool to get a radio tower up there, even if it wasn’t functioning. It had a big tower with the KGVO letters.”