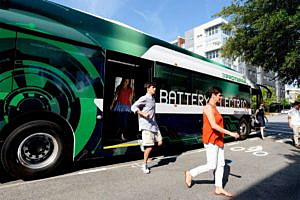 When the student-funded transit agency at the University of Montana purchased two electric buses in 2016, it made the school the first major university in the country to operate the fast-charging buses.

Now, the UDASH transit system will add three more electric buses to its fleet, thanks to a $1.5 million grant from the Federal Transit Administration and its Low and No Emission Bus Program.

“These buses will reduce harmful emissions in and around the university,” said Mariah Welch, vice president of the Associated Students of the University of Montana. “Our innovative student-run transit system was an early adopter of electric bus technology, and we were competitive in this grant application because of the entrepreneurial spirit of our student government.”

The latest grant marks another step in the transit agency’s efforts to phase out diesel fuels. Those old buses, which consumed 26,000 gallons of fuel each year, were often criticized as being dirty and loud as they rumbled through various neighborhoods.

Manufactured by Proterra, the new buses offer battery packages that recharge in 10 to 90 minutes and provide a range of up to 150 miles. While operating a diesel bus costs around $1.03 per mile, the electric buses cost 19 cents per mile, according to Proterra.

“When we launched our first two battery electric buses, it became obvious that we wanted more,” said Jordan Hess, director of ASUM’s Office of Transportation and a member of the Missoula City Council. “We’re saving money, improving our airshed, and providing a great rider experience.”

While the buses cost around $740,000, the reduction in fuel costs net an $89,000 savings over the life of each vehicle. They also cut carbon emissions by several hundred tons.

Hess said the new electric buses will allow ASUM to replace several diesel buses that have exceeded their useful life.

Nearly 400,000 passengers use UDASH each year, Hess said, and more than 15 percent of students ride transit to campus. ASUM expects to order the buses this fall and receive them sometime in 2020.

“Public transportation benefits the University of Montana by reducing traffic congestion and demand for parking,” Hess said. “Transportation is a system, and everybody benefits when our students choose transit.”

Those buses are expected to come online next year.