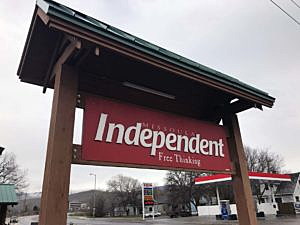 Those who showed up for work at the Missoula Independent early Tuesday found the office locked and were told to make an appointment to collect their belongings. Some were called while still in bed.

The alternative weekly’s sudden closure ends a run of nearly 30 years and brings to one the number of papers owned by Lee Enterprises in Missoula, that being the Missoulian.

“We came to work this morning and were told we weren’t allowed in the building because effective immediately the Indy has been shut down,” said Ariel LaVenture. “At this point, we’re all in shock. It’s a really sad day for Missoula. It’s absolutely heartbreaking for the community.”

Lee purchased the paper last year, prompting members of the Indy to unionize in March in hopes of securing stronger representation within the company. In bargaining sessions over the summer, Lee gave the union two options, either lay off two thirds of the Indy’s staff or close the paper.

But the union made a counteroffer this month, suggesting other cost-saving measures could be taken without cutting jobs or closing the paper. LaVenture, a member of the Indy’s bargaining committee, expressed optimism just last week that Lee would deal in good faith and keep the staff employed.

The Indy employs 12 people, nine of them in the union. Despite a public campaign to keep the paper open, Lee shut it down without advance notice, catching employees and the community of Missoula by surprise.

“My very first thought was frustration that the cover story I’ve been working on all weekend, until 12:30 last night, wasn’t going to be published,” Indy reporter Derek Brouwer said Tuesday afternoon. “I was really excited about that particular story. After that, it was just disappointment and sadness. It’s a terrible way to shut down the paper. It hurts.”

LaVenture said staffers weren’t allowed in the building after the morning announcement.

“Their HR people are in the building, along with Matt Gibson, and we’re not allowed in,” LaVenture said early Tuesday. “We have been instructed to call someone from the Missoulian, who will instruct us to set a time and come in and collect our belongings.”

Gibson owned the Missoula Independent for 20 years before selling the newspaper to Lee. He now serves as the Missoulian’s general manager. Lee’s stock was up 1.89 percent Tuesday to $2.70 a share.

Gibson couldn’t be immediately reached Tuesday morning, though he told the Missoulian that the weekly paper wasn’t financially sustainable. A corporate email sent to Indy staffers said this: “The offices will be closed and you are not to report to work or come into the building. We will continue to pay your salary and provide benefits through Oct. 10, 2018.”

The Indy first began printing in 1991 and earned a loyal following over the years from those looking for an alternative take on local news. Comments on social media Tuesday expressed a sense of loss and frustration with Lee Enterprises, the Indy’s corporate owner.

“This makes me both sad and angry,” wrote Geoff Badenoch. “I will miss the Indy, but when Lee bought it I knew it was just a matter of time before it got put to sleep.”

“The day Matt Gibson sold the Independent to Lee Enterprises, the writing was on the wall,” wrote Chris Colin. “I believe this closure is what Lee had planned all along.”

Brouwer said Lee will pay employees roughly one month of their salary. It doesn’t count as severance, he said, and it may come with stipulations that employees keep quiet as they collect their last month’s pay.

“Those four weeks weren’t severance or anything like that,” Brouwer said. “We’re on the payroll. If we want that money, we need to remain employees in good standing, even though there’s no work to do. We’re trying to understand what that means for us in terms of voicing our frustration.”

“There’s been a lot of community members who have reached out today asking me what they can do, and in some cases, telling me what they plan to do,” he said. “I’m not sure what the ramifications would be for me if I participated in any of that.”

The Indy’s closure follows that of other alternative weeklies, including the Village Voice, which also printed its last issue this month.

Industry watchdogs questioned whether Lee was truly interested in keeping the Indy open when Gibson sold it and joined the Missoulian. The staff’s push to unionize for stronger representation within the company likely forced Lee’s hand, they believe.

“We wouldn’t have known what Lee was considering otherwise,” Lee Banville, an associate professor of journalism at the University of Montana, told the Missoula Current this month.

Brouwer said he’s unsure of his next move, though he would like to stick with journalism.

“I’m not applying for any jobs during this process, as I was hopeful we’d be able to bring Lee to the table and come up with a solution to this, given the clear community interest and the publication,” he said. “I suspect others at the paper want to continue doing journalism here in Missoula, and now we have to figure out how to do that.”