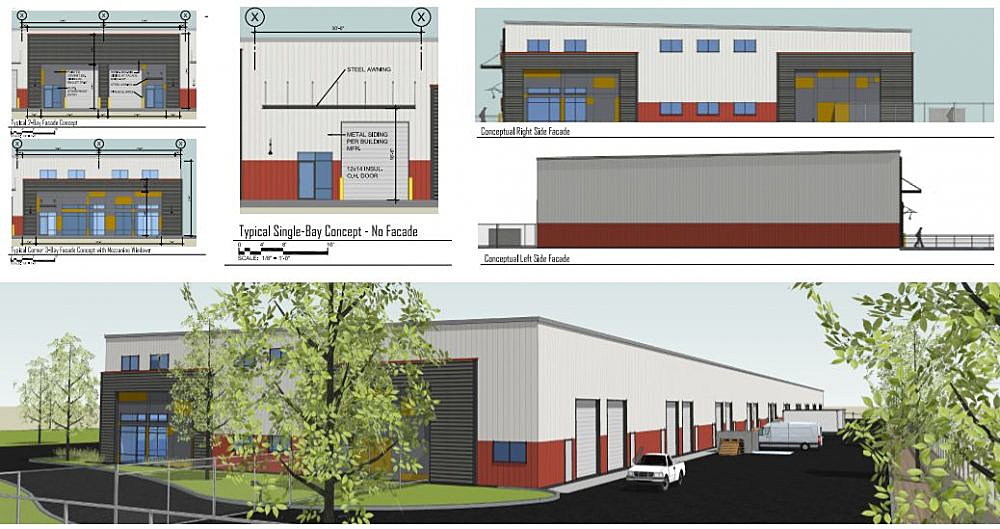 A local business owner and part-time developer is going all in on a piece of property located near Missoula International Airport, where he intends to build a flex warehouse to meet the city’s unmet needs for light industrial space.

Brian Morgan, who developed the four-story, mixed-use project on Spruce and Pine near downtown Missoula six years ago, recently closed on the parcel on Aviation Way. He expects to begin Phase 1 construction next spring to house Missoula’s growing tech and light industrial companies.

“The people who have been voicing interest in the unit so far are businesses I’ve never heard of, and yet they need 20,000 square feet or more sometimes,” Morgan said. “One business needs the entire first phase if they actually decide it works for them, and I’d never heard of them. To me, it’s very exciting to be part of such a project.”

Planned in two phases with a total cost pushing $10 million, the new building will include nearly 129,000 square feet. Phase 1 will cover 66,000 square feet and contain 20 units divisible into into 3,300 square-foot parcels.

As leasing unfolds, Morgan said, Phase 2 will follow with 67,000 square feet divided into 19 units. The project’s corporate neighbors include Coca-Cola, FedEx, and other businesses located in the adjacent Airport Development Park.

“There’s very limited space there and a lot of businesses that are growing – small manufacturers and distribution centers,” Morgan said. “My core business is Adventure Life, and we’re really struggling with where we’d go if we needed more office space, since we don’t need to be in the downtown core. It really seemed like there wasn’t much available.”

Recent reports from a number of different organizations, including the annual market report by Sterling Commercial Real Estate Advisers of Missoula, have cited the city’s lack of light industrial and warehouse space as a potential challenge to the city’s economic growth and job creation.

Missoula County is looking west to the Wye to develop a new industrial park, and Missoula International Airport is considering plans to open a portion of its property for light-industrial and manufacturing, though that project may be years out.

“From what we see day to day with the demand for warehouse and industrial users, and even office users, there’s not space available,” said Matt Mellott with Sterling CRE. “These projects don’t just pop out of the ground. They take a lot of planning and money up front.”

Mellott said out-of-state firms and local companies looking to locate to Missoula or expand operations can’t often find space available. With growth in mind, they generally want that space in two or three months, not a year or more down the road.

The flex space planned by Morgan will help meet that need, Mellott said, adding that other smaller projects are being discussed by other developers.

“There’s some smaller scale projects we’re aware of – more in the 30,000- to 40,000-square-foot range,” he said. “But as any banker would tell you, it’s pretty scary to go just build something on spec. It’s good to have an anchor tenant to build around, and build excess capacity beyond that.”

Morgan was considering a mini-storage project when he found the parcel and changed his plans. The city’s growing need for light-industrial and warehouse space helped inform his decision, he said.

“I found the land initially with that (mini-storage) in mind,” Morgan said. “It seemed like an underutilized parcel. I realized there was a higher use I could put the land to as a warehouse. The whole project became more attractive for me.”