The sign outside Western Cider in Missoula’s evolving West Broadway corridor suggests “an apple a day keeps the doctor away.” If the adage holds true for the growing cidery and its patrons, they should be in good health for years to come.

Western Cider, which officially launched last year, began its second annual Great Bear Apple Drive this week in partnership with the Great Bear Foundation. The effort encourages Missoula residents to remove the fruit – an attractant for bears – from local trees and deliver the bounty to Western Cider.

“The bears come into town to eat the fruit and get habituated, and ultimately, they get euthanized, so we want to help reduce that conflict,” said Michael Billingsley, one of Western Cider’s three founders. “We also want to make great cider with community apples.”

Billingsley’s ties to the Great Bear Foundation and cider aren’t new. The first time he tried his hand at making hard cider, he was harvesting apples as a volunteer for the foundation. The cider turned out poorly, but the relationship was born.

Each fall, fruit trees across Missoula ripen as bears begin moving to lower elevations in search of food to pack on calories before winter. The apples, abundant across the Missoula and Bitterroot valleys, serve as a promising and easy attractant.

In drought years, when natural food sources are scarce, the problem is amplified. The Great Bear Foundation’s Bears & Apples program looks to intervene by reducing the abundance of domestic fruit at a critical time of year.

And as it turns out, Billingsley said, those apples are perfect for making hard cider.

“No one is pruning, spraying or managing their trees, which makes it difficult to have a pretty eating apple,” he said. “But that’s not what we’re looking for with cider. We like a smaller apple with a high skin to flesh ratio. A lot of tannins and flavors are in those skins. They’re great for making ciders.”

Billingsley described those tannins as a critical component of a good cider. Tannins are found in the skins and seeds of many fruits and serve as a natural preservative that holds sway over the aging process.

While “apples and Washington” often go hand in hand, Billingsley believes the apples grown in the Missoula and Bitterroot valleys of western Montana are supreme. Missoula and the Bitterroot once produced apples for the nation, and many of those heritage trees remain.

“That’s what you see in a lot of these people’s yard, these old relics from the original orchards,” he said. “They’re old trees people acquired when they bought a property or a house that had these six trees or these two trees that have been there forever.”

The bears know this as well and each fall they amble into residential neighborhoods in search of a sweet and easy meal. The deer do as well and that, wildlife managers say, attracts predators, including mountain lions.

While the Great Bear Foundation keeps some of the best fruit for distribution to the Missoula Food Bank and the Poverello Center, nearly 15,000 pounds of apples made their way to Western Cider last year. Billingsley anticipates the number to grow this year as the apple drive catches on.

When the fruit arrives at Western Cider’s production facility on California Street, the apples are weighed and sorted. And while the late summer fruit is nearly finished, Billingsley said, the heart of the season is now arriving.

“We’re getting into the heart of the middle of the season, then the late-season fruit,” he said. “People are often surprised you can even grow an apple in Montana, but an apple grown in Montana is 10 times better than an apple grown in Washington. They have more flavor, more sugars and more tannins. They do better here with the cold nights and long growing days.” 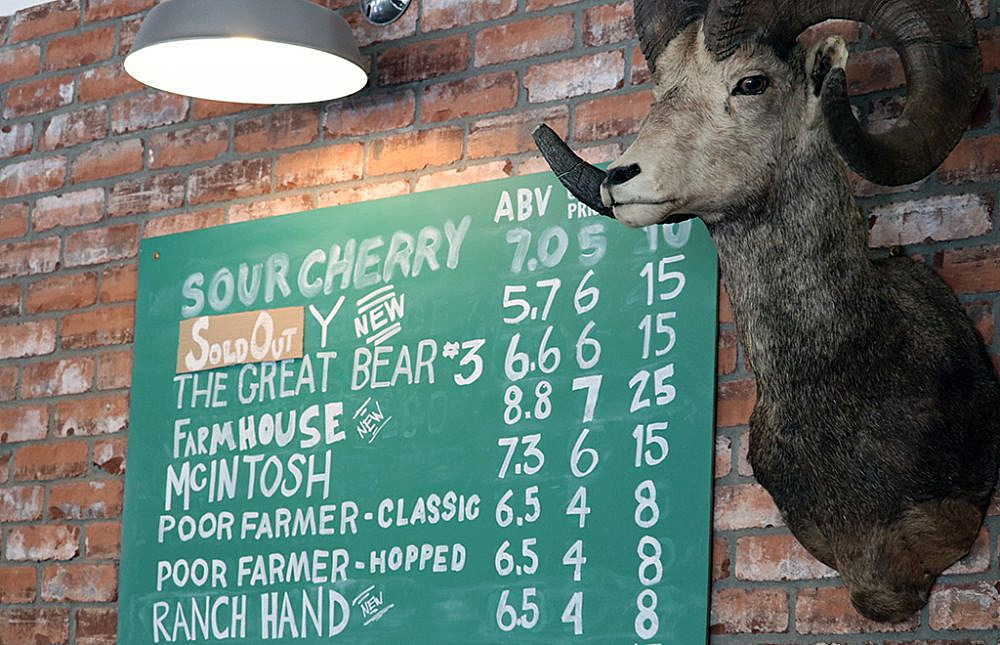 As crews filled bottles with golden cider during a recent weekday morning, Billingsley considered the process and the bounty of fruit ripening on local trees. It takes around 15 pounds of apples to render a gallon of cider.

Last year, Western Cider produced around 60,000 gallons and now offers two canned and three bottled products, including Whiskey Peach, Sour Cherry and Mackintosh. It also keeps nearly a dozen varieties on tap at any given time.

This month, it expanded its distribution to Billings, Helena and Great Falls.

“There’s still a few small towns in far-eastern Montana we’d like to get to, but we have to sign up with another distributor,” Billingsley said. “We’re with five different distributors now, but we’re still not in the whole state.”