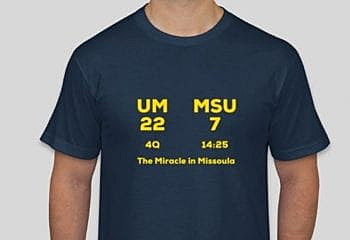 Montana State University’s dramatic comeback against the University of Montana in last Saturday’s football game may have been heartbreaking for Griz fans everywhere.

It was a home game after all, it decided playoff rights, and it secured the Bobcats their third consecutive victory against the Grizzlies for the first time since the mid-1980s.

For one Montana company, though, the Cats’ tantalizing win may also be good for business, that is if their new T-shirt noting the moment the game began to slip away from the Griz is any indicator.

“Half of our staff are Grizzly fans,” said Rory Murphy, co-owner of the Montana Mint. “When the idea came up, it didn’t sit too well with most folks in the office.”

But as good companies do, the staff at the Montana Mint batted the idea around a little more, knowing the rivalry at stake and the bragging rights that go to the victor.

A T-shirt called “The Fumble” was their first idea. It was the fumble, with seconds to go in the game and the Griz set to score, that decided the outcome.

But go back nearly 14 minutes in the game to the start of the fourth quarter. That’s when the Brawl of the Wild began to turn in the Cats’ favor. As the T-shirt notes, it was 14:25 and the Griz were leading 22 to 7.

“We were going to do a shirt called The Fumble, and just get a picture of the actual fumble that happened,” said Murphy. “But when this idea came up, we knew it was a shirt that could sell. Shortly thereafter, the Bobcats scored and just kept scoring and won the game.”

Since launching its T-shirt, sales have been hot, Murphy said. As one might guess, most of those sales are out of Bozeman.

“It’s been awesome to see how many people have already bought it,” said Murphy. “We design and print everything in-state. That coupled with the fact that you can rub this into the nose of any Griz fan in your family has produced a pretty popular T-shirt. Sales have been awesome.”

Things have admittedly gone MSU’s way in recent years. Their enrollment is up while UM’s is down. Their football team is going to the playoffs. They’ve won four of the last five games in Washington-Grizzly stadium.

But the Grizzlies still hold a 72-40 all-time record against the Cats. If hope springs eternal, UM will exact revenge next November, and the Montana Mint will be ready with a new T-shirt.

“We’ve got some angry emails and some angry Facebook messages,” Murphy said. “But Griz fans can rest assured that at the next opportunity, we’ll find some way to get a shirt out for them. Maybe it’s Blowout in Bozeman, or whatever the case may be.”