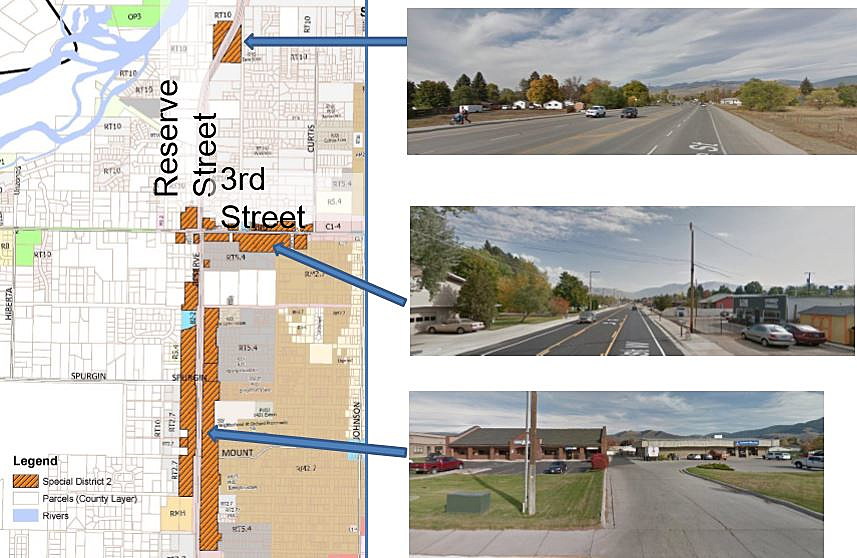 Members of the Missoula City Council on Wednesday took the first step in approving defunct zoning rules for a run of properties along Reserve Street, saying the changes will create standard zoning that gels with the city’s new design overlay.

If approved by the full council on Monday, the changes will increase residential density from 16 dwelling units per acre to 43, and reduce the setback from 100 feet to roughly 45 feet.

“We’re proposing this change to create standard-based zoning districts that will work with the design excellence overlay, and replace an ordinance that’s outdated, onerous and refers to the old zoning code, which has gone out of effect and doesn’t reflect the current character of the neighborhood,” said Tom Zavitz, a senior planner with the city.

In 1982, when the old zoning district was established, the area was considered light residential, and Reserve Street was little more than a rural, two-lane highway.

Over the past 35 years, however, Reserve Street has blossomed into a five-lane highway carrying heavy traffic, and development has shifted from residential to commercial.

“It’s gone from light residential to mostly commercial uses, and the traffic has also increased significantly since the original code was written in 1982,” Zavitz said. “It’s got a wide, open feel to it. That was the original purpose of the old (zoning), to preserve a light residential, non-urban feeling.”

The zoning changes, approved by the Land Use and Planning Committee on Wednesday, looks to invite new uses to the area, including residential and mixed use.

To do that, it increases the residential density from 16 units per acre to 43, and it reduces the setback from 100 feet to 45 feet. The Montana Department of Transportation maintains a 30-foot right-of-way, so the setback proposed by the city is less than it sounds.

“We feel really comfortable with this 43 units per acre,” Zavitz said. “This is really more of an area where you’d see commercial rather than multi-family. But we’d like to see more multi-family here to create more of a community feel rather than this straight shot through the area with large parking lots. It’s very unpleasant to walk around in.”

Efforts to make better use of land, increase density and reduce setbacks have drawn some criticism, Zavitz said. While most property owners in the area have approved of the plan, roughly 15 written comments have opposed it.

Some cite concerns over increased traffic on Reserve Street, though Zavitz said that’s an issue that goes beyond zoning.

“It’s not as easy as adding a lane or not adding a use,” he said. “It’s more of a community planning type of situation. We didn’t feel that adding density would all of a sudden cause a worse situation on Reserve. It’s going to get worse one way or another, and we’ll address that as we can.”

While MDT maintains a 30-foot right-of-way along Reserve, there aren’t any plans currently to widen the highway and add additional lanes. Zavitz said the state agency is willing to work with the city on future remedies, though it has been reluctant to weigh in on the city’s zoning changes.

“They have said they’d like to work with Missoula on the traffic problem on Reserve Street in the future, but in this case, they want to continue to review any of the larger projects, one by one as they come in.

“Reserve Street may not be going to six lanes any time soon or in our lifetime,” Zavitz added. “Roads like this across the country are starting to actually shrink rather than expand. We’re trying to deal with the situation in other ways.”

Members of the council expressed support for the new zoning plan, especially as it pertains to land use and safety at CS Porter Middle School.

“The thought of turning this into a six-lane highway so the Bitterrooters can get to Target or the interstate faster, disregarding the safety of the students and teachers at CS Porter, is just crazy,” said council member Julie Merritt. “I’m very much in support of this.”