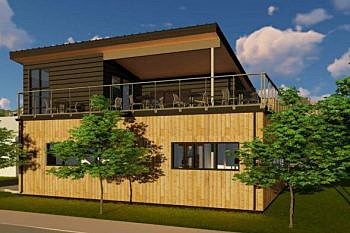 In doing so, members of the City Council directed staff to place a condition on the request limiting the hours of operation.

Chris Goble offered no objection, saying he only planned to serve beer and wine.

“I started cleaning the lot when I was 11 years old,” he said of the iconic Hoagieville. “It’s been a part of my life for 30 years now. In no way am I turning my back on Hoagieville.”

As now planned, Goble will raze the Hoagieville location on South Higgins and replace it with a two-story tavern fronting the roadway. The plan includes a second-story deck with views of Mount Sentinel and the South Hills.

That’s an effort, Goble said, to capture the spring and fall sunshine.

“We want this to be a very family oriented place,” he said. “It’s going to be a huge addition to the neighborhood for young and old. We plan on this being hugely positive for the neighborhood.”

While members of the City Council praised the plans and lamented the loss of “cheese fries,” several feared the tavern’s approval could slip into a full-time bar if it fell under new ownership at some point in the future.

Council member Stacey Anderson directed staff to place a condition on the request limiting the tavern’s hours of operations. That will be considered at Monday night’s City Council meeting.

“We have to think about the long term because this is a zoning change,” she said. “I don’t want to hamper future businesses, but I think we need to be accommodating to the fact this is on the very edge of a residential neighborhood, and that 10 p.m. seems to be a reasonable time for hours of operation for a food and drink establishment so it doesn’t slip into a bar establishment.”

Mary McRae with city planning said that while such restrictions are rare, they have been enacted before. She cited KettleHouse and the Myrtle Street Tavern as examples.

“That’s the only one we’ve had for any tavern use that’s come through,” she said. “When Draught Works came through, there was comment from a lot of people in the neighborhood hoping there would be a condition, but there was no condition restricting the hours.”

John Newman, a nearby resident, praised the plans, calling the future tavern a neighborhood improvement.

“I don’t know if I’ve seen so much excitement over a project in an area of the city as I have with this with my friends and neighbors in the Lewis and Clark area,” he said. “People are extremely excited about this business going in and being part of the neighborhood.”

Goble plans to remain part owner of the Hoagieville locations on Reserve Street and at Southgate Mall.