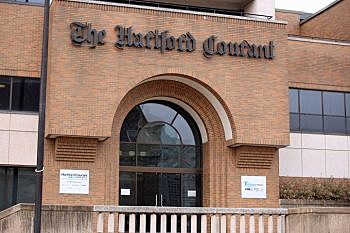 More than 75 percent of the newsroom, which has been ravaged by buyouts and layoffs over the years, have signed cards signaling their desire to be represented by the Hartford Courant Guild. The group will become a unit of the Providence Newspaper Guild, a local chapter of The NewsGuild-CWA, the nation’s largest union for journalists and other news industry employees.

Tim Knight, Tribune’s new CEO who stepped into the role less than a month ago, was in Hartford Monday having lunch with Courant publisher Andrew Julien and newsroom staff. Julien did not immediately respond to an email seeking comment on the organizing effort.

Kathleen McWilliams, a Courant reporter since 2016, is among those who pursuing unionization. “In my short time in the newsroom, I’ve seen our staff decimated and demoralized by buyouts and layoffs,” she said. “I’ve watched our workloads increase without commensurate compensation, and I’ve grown deeply concerned as my colleagues and I struggle to maintain the quality of our publication while corporate managers take home $5 million bonuses.”

McWilliams added: “It has become apparent that it is time for our newsroom to stand united and demand changes that will not only benefit our workers, but our readers, who rely on us to bring them the news.”

Dominic Amore, a Courant reporter for more than three decades, said newsroom employees are keenly aware of the paper’s 254-year history and its special role covering Connecticut and the state’s capital region.

“It is because we care so deeply that we’ve taken this step,” Amore said. “We hope to move forward with a relationship based on mutual trust and respect and to secure the necessary tools to succeed.”

Relieved to have their efforts out in the open, reporters were sporting union pins Monday.

The union-organizing drive comes amid continued turmoil at Tribune Publishing, which has been the focus of sales.

The company terminated negotiations in December to sell the newspaper chain to the California-based McClatchy Co.

The union campaign at the Courant is part of an upsurge in NewsGuild organizing drives in newsrooms across the country.

It follows similar successful efforts at the Los Angeles Times and the Chicago Tribune.

“This is an empowering step forward at the Courant in these challenging times for the entire journalist community,” said Patrick Raycraft, a visual journalist who has worked at the paper for more than 20 years. “I envision keener dialogue, greater diversity and a renewed sense of purpose in our newsroom. And it will benefit our dedicated Courant subscribers who we serve every day.”