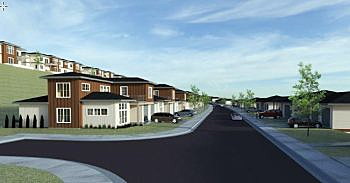 On a 6-4 vote, members of the Missoula City Council on Wednesday approved a pedestrian access plan for a proposed South Hills development, moving the project one step closer to a final vote.

The issue of trails versus pathways and where to place them has, in part, kept Hillview Crossing before the City Council’s Land Use and Planning Committee for several months.

And while the debate isn’t finished, Wednesday’s vote cleared a significant hurdle.

“I appreciate that the applicant took control of the situation to create a proposal that has some good features,” said council member Gwen Jones. “This is acknowledging the fact that this is a compromise.”

The project, proposed by Hillview Crossing LLC, would create 68 townhomes in 34 units in an empty field off Hillview Way. The area is surrounded by other homes and subdivisions, also built on the valley hillside.

But the Hillview Crossing proposal has raised concerns with some over potential runoff, emergency access and its design, which includes blocks that exceed the city’s preferred 480-foot length.

The council has spent several weeks looking for ways to shorten the blocks while also acknowledging the site’s challenging topography.

“This is the last piece of the puzzle,” said council member Stacie Anderson. “It does need to have some consideration to the neighborhoods surrounding it.”

Anderson proposed a condition that would require two pathways placed through the heart of the project, essentially shortening the distance one would have to walk to reach their destination.

In a move for compromise, the developers presented a competing option that also addressed connectivity and access, though not to everyone’s standards. In the end, it passed on a 6-4 vote.

“There isn’t a perfect solution here, but I think the solution proposed in this design gets us close enough to be acceptable,” said council member Bryan von Lossburg.

“It’s an incredible improvement from where we started on this project,” she said. “We have a lot of things we didn’t have before. All of those provide a lot of additional pedestrian activity that wasn’t inherent to the project. I feel it satisfies our mission.”

“Unfortunately, I don’t think we’re done with this issue, even,” he said. “I can think of at least two motions I’d like to make to help mitigate what was just passed. I think we’re going to just hold this over.”

Holding it for another meeting will leave the project in limbo for what will mark six months. The next hearing on the issue is scheduled for May.