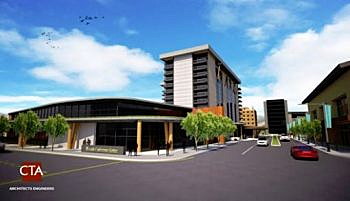 For more than 30 years, the city of Missoula has kicked its share of tires in an effort to see a vacant piece of downtown property redeveloped to its highest and best use.

Now, it’s as close to that goal as ever before.

Members of the City Council on Wednesday approved a 12 month extension to a development agreement with Hotel Fox Partners, giving the group more time to finish the financing needed to complete the details surrounding its hotel and conference center planned in the district.

The $100 million project received the same extension from the Missoula Redevelopment Agency the day before. Council members on Wednesday reiterated the project’s significance, calling it a game changer for the downtown district.

“It could be developed, or it could be developed with a true vision, and strategic,” said council member Gwen Jones. “This project is a game change, not just for the downtown. It envisions the future of Missoula and takes it to the next level, so I’m not surprised it’s a little bit challenging. This is very outside the box.”

The scope of the project has made it challenging for Hotel Fox Partners to secure the financing needed to make the project a reality. But the development team has refined its approach when courting investors, and it’s now promoting the project as four separate pieces.

The project includes a 195-room hotel and three floors of condominiums, along with a 60,000 square-foot conference center and underground parking. Developers have until November to report back on their financial progress.

If successful, they could earn more time to complete the design drawings, a process expected to take up to nine months once architects are asked to start. Several council members have been engaged in the process for years and believe the additional time is warranted.

“The financing portion of this is key, and if that comes together, turning the design team free to get things to 30 percent drawings is a lot of work, but it shows a high level of confidence when that happens,” said council member Bryan von Lossburg. “The uncertainty lies on the front part, so we’ll get a sense before the end of the year on the likelihood of this project, in this conception, moving forward.”

The city received the land on the corner of Front and Orange streets through a donation in the early 1980s and has been courting developers ever since. Offers have ranged from a Ferris wheel to a chicken farm. Given the property’s value and location, however, the city held out for a greater use.

That came when Hotel Fox Partners pitched an earlier version of a project, which included a smaller hotel with basic meeting space. The city asked the developers to think bigger – an act that led to a series of complex negotiations and agreements to get the project where it stands today.

The project represents the first phase of what’s expected to be an eight-acre infill project, one of the largest in Montana history.

“This is truly a signature project for our downtown we haven’t had in a long period of time,” said council member Heather Harp. “We want to see that you’re successful, and if that warrants and extension, so be it.”

The vision also carries broad community support, including that of the Downtown Missoula Partnership. Members of the development team live in Missoula and are vested in the community, said Linda McCarthy, the partnership’s executive director.

“Good projects take a long time,” she said. “The (Old Sawmill District) was ten years of cleanup before the development part began. The Missoula Mercantile was vacant for nine years before we got a project that’s been good for downtown. This is a good project and it’s in the Downtown Master Plan.”