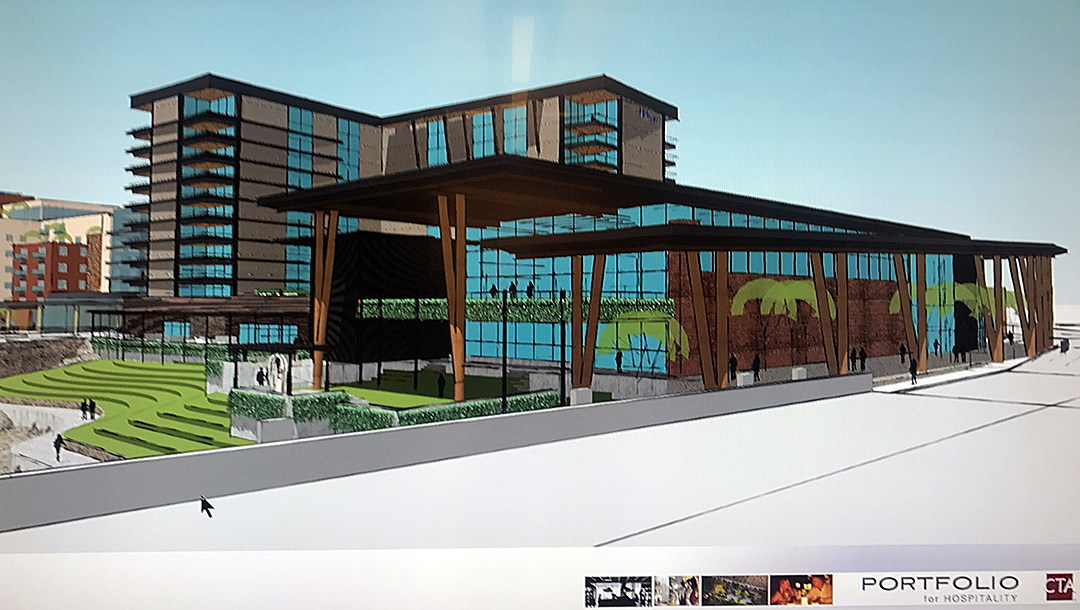 The development team planning a hotel and conference center in downtown Missoula expressed optimism Tuesday that it will secure the financing needed to move the estimated $100 million project forward to final design and construction.

The Missoula Redevelopment Agency’s Board of Commissioners agreed and granted Hotel Fox Partners an additional 12 months to meet the next round of deadlines, including a May 2020 timeline to submit designs for the conference center and parking garage.

The board could extend that deadline beyond 12 months if Hotel Fox Partners shows it’s making headway in financing the project within the next six months.

“From a programming standpoint, we’re 100 percent there,” said project partner Jim McLeod. “There has been a lot of movement and our team is committed to seeing this project completed. We’re on weekly calls, sometimes twice weekly, and right now we’re fairly optimistic that within the next several months, we’ll be able to start the drawings.”

Now years in the making, the project has overcome a number of steps, including a complex series of agreements with the city. As financing shapes up, the team expects to begin final design this fall.

Launching into that phase of the project would represent a full commitment, McLeod said, as the final drawings can run several million dollars.

“We have to raise that equity 100 percent before we can turn the architects and engineers loose on the drawings,” he said. “This is a big project, but there’s a lot of positives out there. Missoula is on the map. We have a lot of businesses looking to relocate here. There’s some real positives when we’re out there talking to folks about why this is a good project.”

The project includes a 195-room hotel and a 60,000-square-foot conference center, along with 405 parking stalls in an underground garage. It represents the first phase of an eight-acre infill project slated for the Riverfront Triangle, including housing, retail and office space.

As part of the agreement, the developers will purchase the lot on the corner of Orange and Front streets from the city for the conference center and garage.

“The conference center is financed with tax increment revenue bonds and the parking with parking revenue bonds,” said Chris Behan, assistant MRA director. “Neither one of those are a general obligation to the city or its residents. It doesn’t raise taxes on anyone. It uses the parking revenue to pay for parking, and future increases in taxes from the hotel and condos to pay for the conference center.” 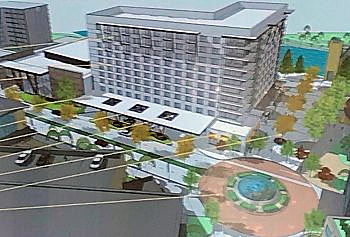 The City Council approved the unique agreement in 2017 and Hotel Fox Partners has moved the project through various stages while buying up surrounding property and investing millions of dollars into early design work.

But convincing financiers to invest in what’s seen as a significant project in any city has been more challenging than initially expected. Hotel Fox Partners remains optimistic that it can finish the task, and it has bolstered both its team and its approach to get there.

“This project is a very complex project and it’s not easy,” McLeod said. “But we’re comfortable with where our costs are and now we’re on a clear path.”

MRA’s board members initially considered an 18-month extension on Tuesday but backed that down to 12 months in their final approval. A six-month update is expected, and the deadline could be extended beyond 12 months if Hotel Fox secures the financing or is close to doing so.

“Having some measurable goals and a report at six months will be very important,” said MRA board member Tasha Jones. “There’s a lot of public interest in this project. It’s important to the community and exciting, and we recognize how creative you’ve been in your approach to get it this far.”

The project comes highly anticipated, both from a design standpoint and its potential economic boost to the community. The conference center would be the largest in western Montana and stand capable of hosting events that would otherwise pass Missoula by.

A study conducted by the national planning firm Conventions Sports and Leisure estimated that the conference center alone would bring $14 million in direct economic impact to Missoula each year.

The hotel and its amenities would also serve as an attraction, and future phases of the project could bring elements of workforce housing downtown, along with additional retail and needed office space.

The lot earmarked for the conference center currently serves as a parking lot, while several surrounding structures are vacant or in disrepair.

“After three decades of planning, we’ve built a relationship with Hotel Fox Partners and put together a project that was several magnitudes larger than the one they had anticipated doing at this site,” said Behan. “It’s a project that’s of great importance to the city if we can make it happen.”