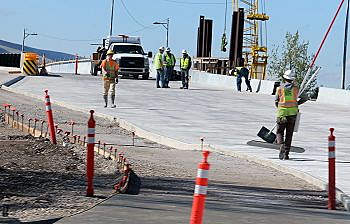 The Montana Department of Transportation will open the eastern half of the new Russell Street Bridge to traffic this week, marking a milestone in the years-long project.

Ed Toavs, administrator of the Missoula district office for MDT, said crews will shift traffic to the new deck by Friday morning and begin construction on the western section of the bridge.

“Our crews have been working throughout the winter and the past year to provide a safe connection through the heart of Missoula,” said Toavs. “While this an exciting first step, there’s still a great deal of work left to be completed and folks need to be prepared.”

The shift in traffic will impact travel through the Broadway intersection and include the placement of temporary traffic signals, the department said. River Road will also be closed to left-hand turns onto Russell street during the duration of the project.

Other closures will be in effect and can be tracked by following this link.

“This traffic swap will be in effect until the second phase of the bridge work is completed,” said Katie Klietz, a public relations manager for the project. “Once the west half of the bridge is complete, traffic can be opened to the entire span of the new bridge.”

Construction is set to finish next spring.

MDT began the Russell Street project last year and is widening the corridor from Dakota to Broadway to five lanes. Other safety improvements are included in the project, including bike lanes, sidewalks and new trail connections.

The city of Missoula and MDT are expected to close an agreement to advance funding for the project’s next phase, which would widen Russell Street to five lanes from Third Street to Mount Avenue.

That phase is eyed for construction in 2024, with final improvements to the Broadway intersection in 2025. It could happen sooner if funding becomes available.

“We want to have it ready for 2023,” Toavs said. “If you have a project that’s ready, then it’s ready, and if funds come available, you can stick your hand up and get those funds.”

The entire project carries a $47 million price tag, making it one of the most ambitious transportation projects in Missoula in recent memory.