With an eye on development, the city of Missoula on Wednesday took the first step in drafting an annexation policy to help inform future growth and the costly extension of city services.

While the city has long annexed various properties, mostly at the request of their owners, it hasn’t had a formal policy guiding the process. The new policy looks to correct that as the Missoula Valley develops over the coming decades.

“This is a policy, it’s not a plan,” said senior city planner Tom Zavitz. “These are guidelines for conducting annexation. They are not rules and they are not a plan for doing that, and they essentially don’t outline priorities. Those are things you’d find in a plan.”

The proposed policy considers a number of factors, including the need for orderly development, the efficient use of public services and the equal sharing of resources.

It also looks to the Missoula Growth Policy in an effort to guide development by promoting urban infill and walkable neighborhoods. In the end, it’s intended to give local government a stronger tool when making decisions on where to place future infrastructure – itself a tool to guide development.

“The question to you all becomes, should we be extending sewer and where should we be doing it, and where have we already done that?” said Zavitz. “When we extend sewer, it says we need a certain density of development to pay for that sewer.”

That also applies to city water, roads, police and fire, and public utilities. Dale Bickell, the city’s chief administrative officer, said having the policy in place can help inform those decisions.

“This annexation policy allows us to put that perspective into those facility plans to design utilities for an area,” Bickell said. “Annexation will still be largely development driven, but having that idea where we want a road or those big utility extensions to happen is a key aspect.” 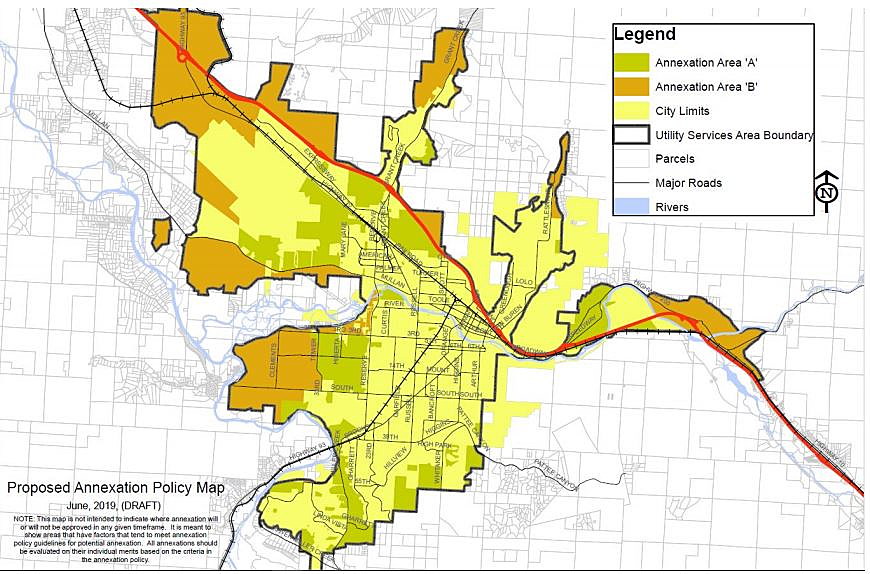 Citing equity issues, the city recently annexed 3,200 acres west of Reserve Street, including the airport, to guide future growth in the rapidly evolving urban fringe. Most of those in the area were already receiving city services and had waived their opportunity to protest the move.

Zavitz said a number of parties are waiting for the city to adopt its official annexation policy before moving forward with efforts of their own. Missoula County stands among them and is working on updates to a number of regulations, from subdivision to zoning.

“They’re looking closely at what we’re doing so they can make plans,” Zavitz said. “We have an urban growth commission that will be able to make use of this as well. The city and the county have some really great opportunities to take off from where this policy starts.”

Helen Jenkins, a member of the Missoula Consolidated Planning Board, also encouraged the city to move forward. She advocated for a “strong and aggressive annexation plan” and said a number of decisions are pending the outcome of the city’s annexation policy.

“We can’t move forward until you move forward,” she said. “We’re in this really weird place with city and county planning right now.”

The proposed policy includes an annexation map. While it means little in and of itself, the city said, it’s intended to identify areas where annexation could occur based on opportunities for growth. It also notes those areas that don’t currently meet policy guidelines.

“Not everyone is going to be developed, and that’s appropriate as well,” said council member John BiBari.