A historic downtown building long disguised by a 1960s tin facade could be restored to its vintage Queen Anne architecture, circa 1890s, if the owner moves forward with plans unveiled on Thursday.

Nick Caras purchased the Radio Central Building on Main Street in early 2018 and began making renovations to the second floor. Along the way, he and architect David Gray of DVG Architecture and Planning began to uncover historic features, most of it hidden behind cheap modern materials.

“We pulled off the front and found mullions that had been sawed off at the window line,” Gray said Thursday. “It was amazing to see that detail work. We went up into the turret and found the windows still there and the glass still in the original windows.”

Old city maps show the building as “being built” in 1893. Many of the properties on that edge of the city were still vacant at the time, or contained smaller structures, according to the maps.

By 1893, however, city maps identify the building as the Union Block, and early renderings reveal Queen Anne architecture similar to the Higgins Block on the corner of Front Street and Higgins Avenue – a building commissioned in 1889 by C.P. Higgins.

The architecture in the Union Block depicts the pride of a still-young Missoula with a peaked turret, gabled windows, a parapet, and hand-carved granite blocks. The structure’s original name is engraved in granite midway up the structure’s facade.

“This is probably one of the prettiest buildings downtown,” said Gray. “We’ve found something. It’s a real treasure.”

Over the past few months, Caras and Gray have selectively removed portions of the modern facade to get a fuller picture of what lies behind it. They inserted cameras after removing modern vinyl windows to determine the structure’s condition and were pleased with what they found.

“This section of the facade is in beautiful shape,” said Gray. “There’s pillow granite stonework everywhere. The masonry is in fantastic shape.” 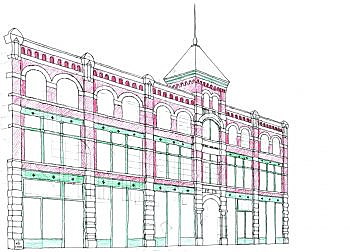 Those passing by at street level have already observed the stone columns and granite facade, both recently revealed. The team hopes to continue revealing the structure’s elements and return the building it to its vintage charm.

The Union Block has been covered for so long, few knew what sat behind it, and most knew it only as the Radio Central Building.

“We really didn’t have any pictures before that,” said Chris Behan, assistant director of the Missoula Redevelopment Agency. “(Caras) and his architect have been doing some research and found the building’s original style. They want to go back to that.”

It’s not yet known what a restoration would cost, though it likely it won’t come cheap. Caras has already made improvements to the building’s interior, renovating the second floor, with plans to do the same on the third.

The structure sits within the Front Street Urban Renewal District and qualifies for tax increment financing. But the district isn’t flush with funding at this point, and the city’s facade improvement program won’t come close to contributing to the cost of restoration.

Gray is expected to return next month to seek assistance in whatever form it can be offered.

“We’ll have to be creative in how we move along,” said Behan. “We will have to go back into our toolbox and look at the things we did with the Wilma in terms of conservation and so on.”

Just two years ago, Main Street east of Higgins was best described as an eyesore. But recent development has given the district new life.

A brewery and taproom now occupy what was a weed-filled parking lot. The Firestone garage, long empty and crumbling, is being razed to make way for a new six-story hotel.

Further down the street, the framework of what will soon serve as Missoula’s new public library breaks the skyline.

“This (restoration) will make this street, which was really quite nasty, something that’s going to tie into the library and the brewery and hotel and everything else that’s down there,” said Gray. “We’d like to restore it, but we’ll need your help doing it.”