When Amar Juluri was asked to leave his Dallas home for Missoula to help integrate the growing tech company ATG into the Fortune 200 powerhouse of Cognizant last year, his first answer was no.

Juluri, an associate vice president, had been with Cognizant for 18 years, ever since he graduated college. He was happy with his role in the company back home and its warmer southern climate.

But nearly a year later, he has changed his mind.

“To be honest, I didn’t want to come – I was not for being in a remote place,” said Juluri, who is originally from India. “I said ‘no,’ wanting to do something in a much warmer place. But then I’m feeling warmer here in Missoula than anywhere else because of the good people and all the good things ATG is doing. I’d definitely say that I’m lucky to have made my mind up to come.”

Cognizant officially acquired ATG last September in a move widely celebrated in Missoula. The acquisition meant an opportunity to grow the local workforce and bolster the city’s burgeoning tech scene under the umbrella of an international company.

It also established a pipeline between Missoula and a firm ranked by Forbes as one of the fastest growing and most respected tech companies in the country. Cognizant employs around 280,000 people worldwide and has “aggressive” plans for growth in Missoula and other locations.

It’s Juluri’s job to ensure the integration between ATG and Cognizant remains seamless.

“For me, this is my first time working on anything related to integration,” said Juluri. “I was apprehensive, but at the same time I was confident. What ATG does is so very unique and so very different.”

While the company plans “aggressive” growth in Missoula, it hasn’t defined what that actually means, though growth is already taking place. ATG now claims around 200 Missoula employees.

As part of that, it’s also Juluri’s job to ensure ATG-Cognizant has the workforce it needs to meet growth projections, and he’s doing so via a novel program dubbed “All-In-Missoula,” or AIM.

In partnership with the University of Montana and Missoula College, the program has already graduated two classes, each trained in the cloud technology advanced by ATG and Cognizant. The first cohort included 26 trainees while the second saw 28.

Each one of those students landed a job within the company and it’s not a bad place to work, given its new location. The Solutions Center in Missoula’s Old Sawmill District includes craft beer on tap, city views and a laid-back atmosphere. Dogs are welcome and the pay is well above Montana’s median wage.

“Like any other tech company, we’re facing a tight labor market,” said Juluri. “This (AIM) program will go into the future. We’re planning for the next cohort already. We’re up against a very tight labor market and this brings in the necessary skills.” 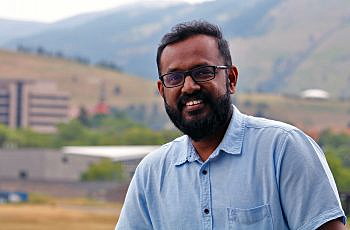 The program traces its roots to a partnership formed between ATG and UM before the acquisition took place last year, and it was created for a similar reason. ATG was growing, and it needed skilled workers to fill its jobs.

Cognizant saw that program’s value and helped it expand to its current form.

“There was a precedent,” Juluri said. “We thought it was a success story, and we believed we should follow that and strengthen it and go build out a program that allows us to train students on various aspects of business operations and technologies, and have them apply for jobs and change their lives.”

Tom Stergios, vice president of strategy and corporate development for ATG-Cognizant in Missoula, said both the AIM program and the integration efforts are “firing on all cylinders.”

He points to the recent graduating class and its unique composition as a mark of success. It included a wide range of students, including a former bartender, a concrete worker and a woman who first attended college in the 1970s as an exchange student.

“It’s driven by changing technologies, but it’s also about changing business models,” Stergios said. “The as-a-service economy, the Internet of things, recurring revenue relationships and the changing buying habits of Millennials – there are a lot of technology and business paradigms causing companies to rethink how they manage their customers and revenues.”

While Juluri was at first reluctant to move to Missoula, he has settled into his new city. Along the way, he also has indulged in the state’s natural wonders – something city leaders like to describe as quality of life.

Juluri was so taken by his surroundings, he visited Glacier National Park in one afternoon and arrived in Yellowstone National Park the next morning.

“I’ve gone up all the trails – the Rattlesnake, up to the M and to the L. There’s a lot of local food that I’ve probably enjoyed for the first time since living in the U.S.,” he said. “I would relocate for my job to Missoula. I love this place and I like to be here.”