When Sara Forsythe had the vision for a hands-on arts center in Missoula, it took three years of perseverance to transform her dream into today’s Zootown Arts Community Center.

Now, she and her husband, Jared, are taking the same approach to another vision – installing a zipline west of Missoula, complete with outdoor education and adventure high in the forest.

The project has been eight years in the making.

“We’ve been saving for that long and planning and working with lots of agencies,” Sara said. “With some management, the property will grow big, beautiful trees, and I like that it’s a fixer upper. Jared and I are like that, even with ZACC. It was an idea I had in my head for three years, and then I just manifested it. It was a lot of hard work, and this has been the same thing.”

The Foresythes have submitted an application seeking a special use permit to install the zipline, which is now pending review. The county is gathering feedback from a number of agencies, and commissioners discussed the proposal briefly this week.

While the county conducts its due diligence, the couple is prepared to address public concerns. Sara said she’s aware of the feedback the project has generated, including neighborhood fears over increased traffic.

As planned, she said, the attraction would generate less than 20 vehicle trips a day. She said guests who book a tour would be escorted up the mountain in an all-terrain vehicle equipped for the task.

“The people who live out there are concerned, I’m sure,” she said. “But the forest is a natural sound barrier, and it’s really far from other people. Once you get up on the property, it’s not going to be much of an impact.”

The project is proposed for two parcels surrounded by both private and public land and offers an elevation gain of 1,600 feet. They’re looking to gain access off Big Flat Road, and the property is currently zoned for recreation and commercial use.

The project would require thinning the two parcels to reduce the risk of wildfire.

“There’s some beetle kill, and a good portion of the property hasn’t seen any maintenance,” Sara said. “To have 350 acres that haven’t been cared for in 40 years, it could be a huge problem. We’re hoping people will be pleased with that maintenance.”

Sara, who now teaches ceramics at North Idaho College, and Jared, a biology teacher, both graduated from the University of Montana. They currently live in Idaho during the school year and own and operate two businesses, including Coeur d’Alene Adventures and Adventure Missoula. 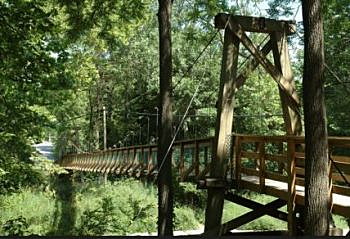 The later business offers rafting trips down the Alberton Gorge, and Adventure Missoula Zipline represents an expansion of their business. The couple looks to capitalize off Montana’s outdoor recreation economy, but add education to the mix.

As envisioned, the multi-hour tour would include interpretive signs noting the surrounding natural features and Missoula’s history. Guests would do more than zip down the mountain.

“You’re in they canopy the whole time, so you never set foot on the ground,” she said. “There’s some sky bridges we’ll put in – something you walk on while you’re still hooked into the cable and the harness.”

The property’s location offers a number of features suited to the project. From the top, guests can view the Mission Mountains and the ancient shoreline of Glacial Lake Missoula. The city of Missoula spreads below, though the forest feels removed and and quiet.

“I think the elevation gain will make it world class, and because it’s quite steep,” Sara said. “I think Jared and I like the way it looks at Missoula. It’s a very classic look, looking down at the city, and it has a lot of diversity to it.”