A team of city and county officials gathered for the first meeting of the Urban Growth Commission this week, embarking on a path toward greater collaboration between the two governments as they grapple with the region’s current and future growth.

Saying the Missoula metropolitan area must change the way it approaches development, the newly formed body dove into everything from transportation planning to zoning, and the city’s standing philosophy on growth.

“Focus inward doesn’t mean we want as much development at the city center as possible, but in places that have services, that are walkable and don’t completely rely on having a car,” said city planner Tom Zavitz. “It doesn’t mean development won’t happen on the fringes, but if it does, we want it to be a Missoula community.”

Missoula and adjacent areas of the county are expected to grow at a steady pace over the next few decades, demanding additional housing. And as it grows, it will place added strain on the region’s transportation system.

Zavitz said Missoula needs between 650 and 700 new dwelling units each year to keep pace with its growing population. The city’s high cost of housing can be attributed in part to its lack of housing inventory.

“That need will continue to grow, and it’s probably not enough to address some of the problems we have, like affordable housing,” Zavitz said. “We might need more (housing) to take some of the pressure off those rising real estate prices.”

They are inseparable, local planners said.

“The Mullan area is a microcosm of those big picture, regional issues we’re facing,” said Aaron Wilson, the city’s transportation planner. “We’ll continue to grow, but we’re geographically constrained. Missoula is changing, and we need to get ahead of that and think about that.” 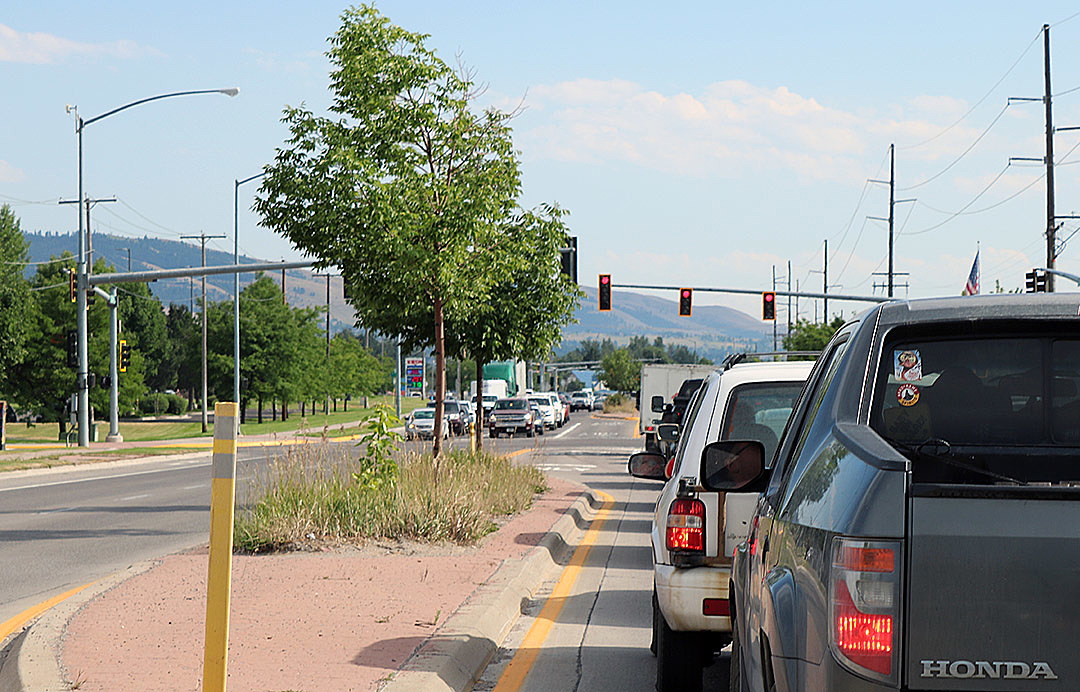 Transportation planning also carries other impacts, including the cost of building roads, followed by ongoing maintenance costs. City officials placed the cost of the Russell Street project at $40 million a mile, not to mention long-term maintenance and service needs.

Over the next 30 years, the region’s transportation system will see a 50 percent increase in automotive trips, Wilson said. Given the constraints of the region and the financial costs associated with infrastructure, the region “won’t be able build its way” out of its traffic problem.

Instead, that will require smart planning and a change of habit.

“It’s really a mindset of how we design a community so people don’t have to rely on their vehicle,” Wilson said. “They’ll still have that option, but they’ll also have three or four other options. We need to think about how design will tie into what infrastructure we want to build to support the type of development we want to see.”

Missoula County this year applied for a $23 million federal BUILD grant to help fund infrastructure needs between Mullan Road and West Broadway, west of Reserve Street. The area is suitable for future development and lies within reach of existing city services.

But it’s also under pressure for new and planned development, and it hasn’t been well planned in the past. That has created traffic congestion, much to the chagrin of area residents and those who frequent the area.

“We’re all well aware of what’s going on on the northwest side of Missoula, out in the Mullan Road and West Broadway area,” said Andrew Hagemeier with Community and Planning Services at Missoula County. “The county needs to get involved in coordination around our edges.”

The Urban Growth Commission looks to increase the collaboration between city and county government across a range of issues including climate change, annexation, zoning, transportation and housing.

Planning is also front and center in the partnership, and Missoula County expects to hear within the coming months whether it will receive the federal BUILD grant.

But even if it doesn’t win the grant, Hagemeier said, efforts to get ahead of growth will continue.

“The infrastructure piece is moving forward, regardless of the outcome of the grant,” Hagemeier said. “If we don’t get the BUILD grant, what we’ll be doing is smaller. We’ll be focusing on Mary Jane Boulevard and the intersection of George Elmer Drive and Mullan Road. The other sections will have to be filled out later.”

The city and county are also moving forward on a master plan for the Mullan area. Hagemeier said they plan to hire a consultant by fall and present a draft by next summer.

The consultant will not only complete the master plan, but will also create a handful of zoning designations that both the city and the county will adopt.

“The county will have the ability to proactively zone the area,” said Hagemeier. “We’ll have one consistent set of regulations throughout that whole area, which will make things more predictable for the neighbors and the developers and everyone involved.”

City and county planners, along with their elected officials, see opportunities in the new collaboration and their growing partnership.

“The collaboration that’s occurring between the city and county, the way the planning profession is evolving and the new types of regulations that are being developed, are really an opportunity for our community,” Hagemeier said.

“We need to do things differently. Between the increasing costs of housing, the congestion that’s occurring and our changing climate, we need a new paradigm and approach to community development.”