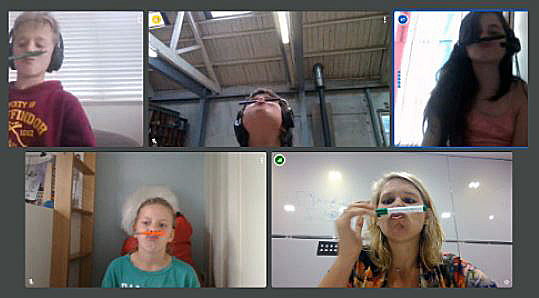 When Matt Strawbridge was a boy growing up in New Zealand, school became difficult. He couldn’t read given his dyslexia, and his grades suffered.

Looking back, the experience isn’t filled with joy.

“School was not a happy place for me growing up,” said Strawbridge. “I was at the bottom of the bottom of every class. I didn’t fit in.”

That raw childhood experience may be key to Strawbridge’s success as an entrepreneur and his status as the unlikely co-founder of the online learning lab known as Peoply, which could open an office in Missoula.

In a partnership with RocketLab and Ovio Mindfulness, the platform offers classes to small groups of kids. Each class is led by an inspiring facilitator, one Strawbridge likens to “your favorite babysitter.”

The coursework is designed for the needs of the individual child. One looks to build confidence among students while another opens their imagination through rockets and space. A third caters to children struggling with anxiety, stress or lack of focus.

Whatever the course, the goal is the same. It looks to build social skills, problem solving, critical thinking and creativity in participants.

“We recently partnered with the New Zealand government to offer what we’ve developed to all the schools in New Zealand for free, starting next year,” said Strawbridge. “From there, it was like, ‘Now what?’ Lots of kids feel lonely. There was more that we could do.”

The platform currently operates in New Zealand and the United Kingdom, though Strawbridge and co-founder Tom Peoples are looking to launch in the U.S. They spent several days in Missoula last week, scouting the city as the potential location for a North American office.

Montana, he said, isn’t unlike New Zealand, and Missoula isn’t much different than home.

“We had a look around here and thought it felt like home,” he said. “We’ll gather as many insights as we can. I’ll go home, meet with a group of advisers and people we work very closely with. We’ll build out an action plan and figure out when and how we’d go about doing something like this.”

Strawridge developed a similar platform as a young teenager known as Potential. It wasn’t his intent to earn the status of an entrepreneur, nor was he looking to own and operate a business of his own.

But when he turned 17 and received his first offer to buy the platform, he realized he had a product.

“Today, we’ve been able to reach and educate over 120,000 kids all over the world,” he said. “I just wanted to help someone. I didn’t want anyone to feel the same way growing up.”

Before heading home to consider the future, Strawbridge expressed pleasure with his trip to Missoula. He met with members of the Montana World Trade Center and others within the business community.

“We want to launch into the United States and start selling,” said Strawbridge. “We are very keen and excited about the possibility.”