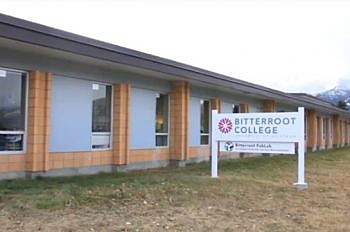 (KPAX) HAMILTON — Backers of a move to make Bitterroot College an independent school say they’re making progress in a petition drive to get the proposal on the ballot next year.

However, Ravalli County commissioners suggest the petitioners might want to clarify their pitch, if they’re going to convince voters on financing the change.

It’s been over a decade since the Montana Legislature turned down a proposal to establish an independent college program in the Bitterroot.

Instead, lawmakers established Bitterroot College as an extension under the University of Montana and Missoula College.

However, some college supporters, and businesses looking for the school to train workers, complain the Hamilton campus finds itself in competition for students and funding.

Earlier this fall, the Bitterroot College Advisory Council, and Ravalli County Workforce Alliance began circulating petitions with hopes of giving the college its own, independent program under the Montana University System.

On Thursday, Ravalli County commissioners were told the petition drive has topped 4,000 signatures, roughly 1,000 short from placing the question on the ballot next May.

“Ideally we become independent and really have control over our curriculum. Actually be able to claim our students as Bitterroot College students, as opposed to Missoula College students,” said Steve Grover of the Ravalli County Workforce alliance. “If this goes forward, there would be a local board that will be established, that will actually control that school.”

The plan would be to establish a mandatory mill levy, of roughly $12 per $100,000 of value, convincing the Legislature to allow Bitterroot College to become its own program.

The move could also improve the school’s standing in the University System with enough support.

“If we’re not successful with that, I think the other thing that this is going to achieve is at least getting the recognition in terms of how Bitterroot College is currently being treated,” said Grover. “This is Bitterroot College and we need to approach it that way and fund it that way.”

Commissioner Jeff Burrows said he liked the proposal. But he felt the petition backers could do a little bit more to clarify what’s being asked of the voters.