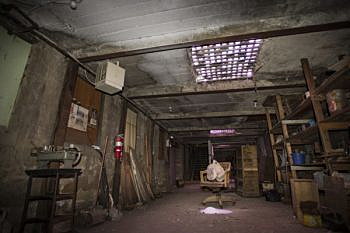 HAVRE – Things are a little bit out of kilter at Havre Beneath the Streets these days.

For instance, the dentist’s office at the underground display, which depicts life in Havre’s underground business district in the early 1900s, is in the saloon.

“There are what we call displaced displays,” said Christy Owens, secretary of the attraction.

The displacement was caused by a water leak beneath the sidewalks in front of the Havre Elks Club on Second Street.

Some of the attractions from that side of the underground facility were subsequently moved out of the way to avoid damage to the artifacts.

But the most serious problem was the wheelchair lift on that side of the building. It is out of commission and cannot be replaced until the entire problem is fixed.

“We want to accommodate everybody,” she said. ”We want everyone to enjoy it.”

That’s why Havre Beneath the Streets launched a fundraising campaign to finance the attraction’s repair and enhancement.

The Eagles Club has held benefits, collection plates are out throughout Havre, and all-terrain vehicle was just raffled off — and won by Kristi Peterson of Havre.

The Christmas stroll will take place this Saturday at Havre Beneath the Streets. And people are urged to attend and, if they wish, contribute a little extra, Owens said.

“The community has been great,” she said, adding that people have been dropping off small and large donations for the campaign.

The idea is to raise as much money as possible by spring.

The money will be used to attract matching grant money from the Montana Department of Commerce tourism program. The grant applications will be reviewed next summer.

The rules of the program will be set next year, but the department will provide money to tourism programs around the state.

Tourism officials see Havre Beneath the Streets as the central attraction in town, bringing in tourists from around the region.

Combined with other historical attractions such as the Wahkpa Chu’gn Buffalo Jump, Fort Assinniboine and the H. Earl Clark Museum, people could be encouraged to spend the night in Havre, dine out here, stay in area hotels and enjoy meals in town.