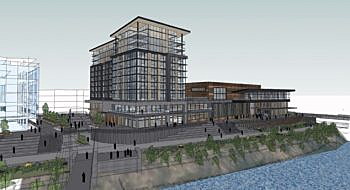 A facility the size of the hotel and events center planned in downtown Missoula could typically have a heavy carbon footprint without a green approach, given the tens of thousands of guests and concert goers expected to come and go over time.

But Nick Checota with Clark Fork Riverfront Properties said the locally branded Drift will incorporate green building techniques and environmentally friendly practices in an effort to reduce its carbon footprint.

“There’s a lot of things we’re looking at to make this an environmentally friendly building,” Checota said. “We’ll probably be a LEED gold building, but the process of going through the paperwork is a waste of money and time. For us, it’s more important that we achieve the standard rather than adopt the standard.”

Checota detailed the working design this week and the project’s anticipated September groundbreaking. Along the way, he also noted the efficiencies planned for the structure, including the potential for solar energy and underground water for cooling.

As the owner of the entertainment enterprise Logjam Presents, Checota also operates three other concert venues in Missoula, including the Wilma, the Top Hat and Kettlehouse Amphitheater. Last year, Logjam sold roughly 250,000 tickets while maintaining a zero waste policy.

“Right now, every single one of our properties is a zero waste venue,” he said. “We have no plastic at any of our venues. The community knows we’re a very green organization.”

A handful of Missoula businesses have tracked toward similar goals of reducing waste, including several locally-owned grocery stores, which at times have given out reusable bags to cut back on single-use plastics.

Home ReSource has led the way with its own nonprofit, providing an array of building materials for reuse. Other firms focused on deconstruction have also played a role in shifting the status quo.

Two years ago, the Missoula City Council also adopted a zero waste initiative, though it remains a challenging goal. The council hasn’t yet debated a ban on plastic grocery bags, nor mandatory recycling.

For now, such efforts are being led by environmentally conscious businesses. Logjam, for instance, composts food waste and recycles its products. It doesn’t offer plastic at any of its venues.

“We went and partnered with Philipsburg Brewing, which produces a water bottle they fill from their spring, and it’s 100 percent recyclable,” he said. “That’s an expense. Plastic water bottles are 10 cents a unit. These are a $1 a unit. We didn’t change the pricing to our customers and we do around 80,000 units of water a year, so you’re talking almost a $70,000 commitment on just that.”

Checota said the hotel and conference center will deploy a similar philosophy.

“This whole complex will be a green venue,” he said.