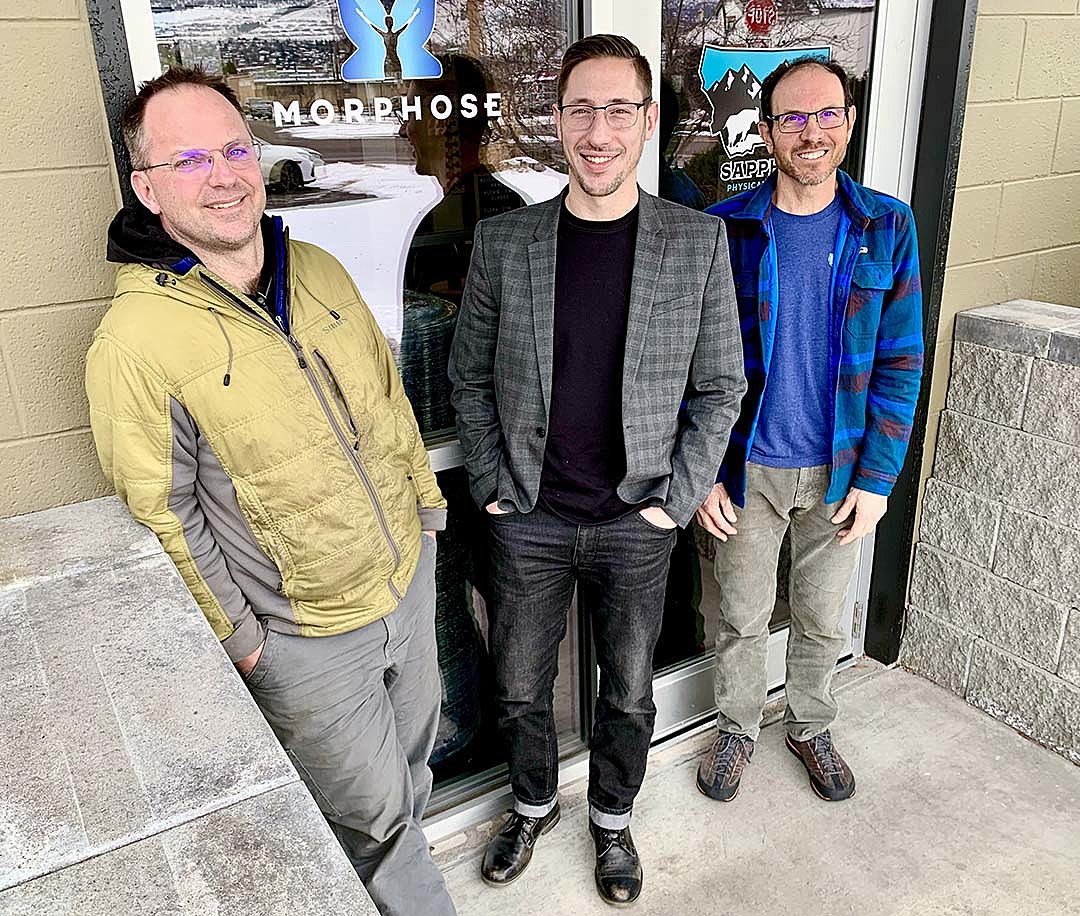 Like a Hollywood Pixar studio creating high-tech 3D movies, a team of Missoula software developers hope to make it easier for physical therapists to care for their patients and keep pace with an increasing demand for their services.

An online-only software program, Morphose Exercise Systems captures 850 to 1,000 common movements on screen to help keep patients at home on track with exercise and feedback.

John Fiore, a 27-year physical therapist and founder of Sapphire Physical Therapy, created the new business name and logo for two reasons: it plays well off the definition of ‘metamorphosis’ and elicits a brilliant blue Morph butterfly, evoking one’s transformation to wellness.

“When physical therapists check on the patient, they’re able to see how the patient is progressing,” said Fiore. “It’s all self-reported metrics, so the PT can track the changes a patient experiences.”

Fiore teamed up with co-founder and software engineer Joe Jensen and Chief Business Officer Michael Gardner to put the wheels in motion for the cutting-edge technology.

“The physical therapy practice and physical therapists have been using home exercise programs for years and years – and it’s been a very slow evolution,” said Fiore. “The technology has not kept up.”

Instead of PTs sending patients home with an old-school drawing of a stick figure or photo-copied exercises to follow, Morphose Exercise Systems can track pain levels, challenges and flexibility.

“It’s self-reported, but we’ll also be able to track adherence to see if they’ve done the routine,” said Fiore. “That will be tracked over time, so we’ll be able to see a pattern.”

The software will streamline treatment and give PTs an overall picture of the patient’s progress as well.

The visual directions and easy online accessibility to the assigned exercises are among the advantages of the software.

“And even for the folks I do see once or twice a week,” said Fiore, “in physical therapy, there’s a responsibility on the patient to do something every day, in addition to what they get from me. They will improve quicker if they are doing what they’re supposed to do, so this motivates them to be adherent with the routine – and fill out those metrics once a week.”

In development since 2017, the software program should fill the gaps in the growing physical therapy industry.

Ander Bergstrom, co-owner of motion-capture studio MocapNow in Seattle, said it was the first time his high-tech business has worked with a physical therapist to build such industry-specific medical software.

“This is the first one of this kind, really,” said Bergstrom. “The end product is different than what we’ve done before.”

In the Seattle studio, MocapNow covered Fiore in a black motion-capture suit configured with a few dozen lights against a green screen to record basic physical therapy motions.

“Over three days we captured over 500 motion captures,” said Bergstrom. “We’re still in the process of delivering those animations to John’s specs.”

The technology takes time and finesse.

“They are therapeutic PT motions that need to be done properly,” Bergstrom added. “It’s not just ‘capture and done.’ It needs to be massaged.”

Eventually, some exercises will include the typical props PTs use in their clinics, such as weights, elastic bands, door frames and other tools of the industry.

MocapNow usually motion-captures video games and virtual reality projects. It built a motion capture basketball court for Google and the NCAA that tracks statistics and scoring and displays a basketball hoop, similar to a virtual driving range for golf.

Gardner said Morphose’s goal is to capture 2% of the market within its 3-year strategic plan.

The Bureau of Labor Statistics forecasts that 54,200 therapists will enter the U.S. workforce by 2028, an increase of 22% from where it now stands. The projected increase is 4 times the average growth rate of other occupations.

The BLS also forecasts that 38,000 more physical therapy assistants will enter the workforce by 2028, marking an even bigger increase of 26%.

The business-to-business model subscription will cost around $25 per month, said Gardner. The software complies to confidential medical HIPPA standards.

Following Fiore’s in-person patient analysis, he identifies physical weaknesses or range-of-motion deficits, then he creates a personalized exercise routine for the patient, who receives email notifications after leaving his office.

“Access to decision-makers is a lot easier,” Gardner said from the sales perspective. “There’s a lot less decision by committee and trying to integrate into budgets that are 18 months down the road.”