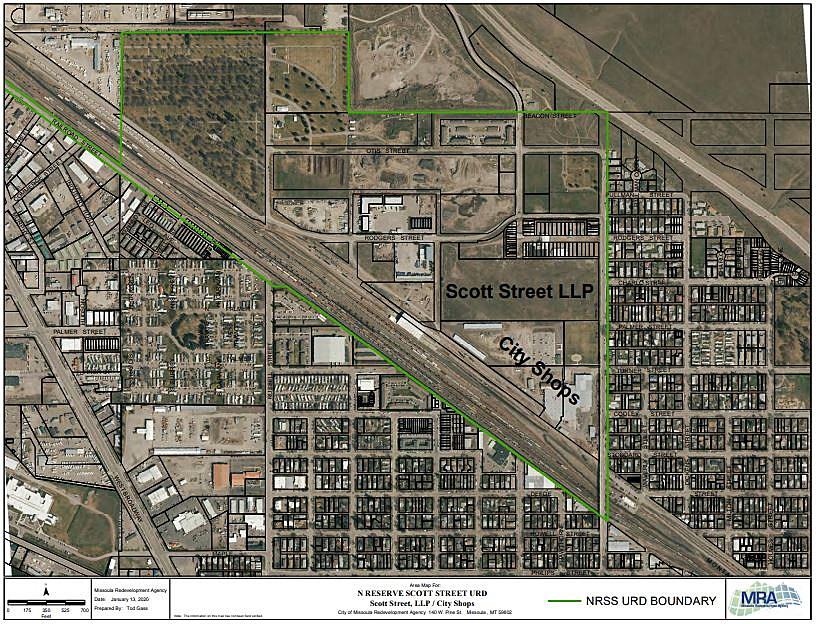 The Missoula Redevelopment Agency on Thursday approved up to $55,000 in funding to complete due diligence on roughly 19 acres of land off Scott Street ahead of a potential purchase by the city.

If the report comes back clean, the city would move to acquire the property by the closing date of May 30 and place half the parcel, or roughly 10 acres, before potential developers this spring for needed housing.

Ellen Buchanan, executive director of MRA, said that could also free up other city-owned parcels for redevelopment, including the Missoula Water property on West Broadway and a scrabble field in the Scott Street district that’s currently being used for equipment storage.

“That frees up property to the north that’s easily developable as residential or mixed use,” said Buchanan “This is a key location in the Scott Street-North Reserve Urban Renewal District master plan, and we’ve got a buy-sell the clock is ticking on. We need to do some due diligence there.”

The 19 acres, formerly owned by Huttig Building Products, was acquired more recently by Scott Street LLP. The later has been undergoing environmental remediation for last several years to rid the soils of industrial pollutants.

Over that time, the eastern 10 acres of land has been cleaned to residential standards and has been certified as such by the Montana Department of Environmental Quality. The remaining 9 acres on the property’s western edge is currently being cleaned to commercial standards.

The city’s due diligence will seek any additional barriers to redevelopment.

“There’s 20 plus years of history on this site,” said John Adams with the city’s Office of Housing and Community Development. “There’s a lot of data to go through.”

Plans to redevelop the area were codified several years ago when the city adopted the area as an urban renewal district and drafted a master plan for future growth. The Scott Street Village was the first redevelopment project to break ground, and other projects are looking to follow suit within the district.

If the city acquires the parcel, it could be one of several properties presented to developers in a showcase planned later this year by the Missoula Economic Partnership.

“It opens potentially two properties in the opportunity zone and allows us to have properties available for showcase, or whatever is deemed appropriate through that process,” said MRA board member Tasha Jones. “There’s an opportunity to advance some of our community goals and values in partnership with developers on housing and other multi-use endeavors.”

“It potentially gives the city a couple sites to market nationally as being in both a URD and an opportunity zone,” she said. “There are developers actively looking for that combination.”