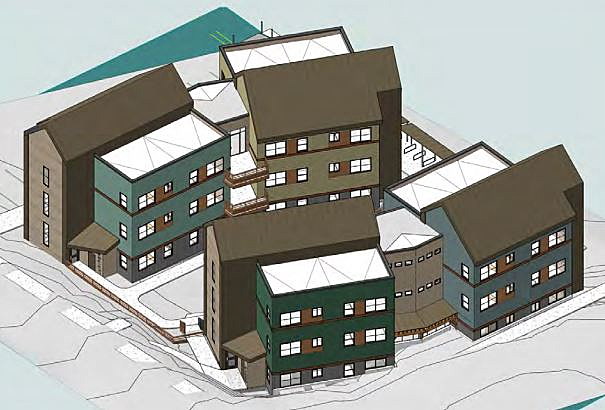 A former industrial site off West Broadway will soon provide attainable housing through a concept employed in other metropolitan markets faced with steep housing costs.

The $3.5 million project, dubbed Ponderosa Village, is planned for the corner of Pine and Scott streets. It’s expected to open next year and provide 46 bedrooms in what architects described Thursday as pod-style living.

“It’s becoming pretty popular in other cities as a way to address affordable housing,” said Jules Landis with In2itive Architecture. “It addresses the single folks, new college graduates, the younger people in the service industry.”

Planned for two buildings placed around a courtyard, the facility will include 46 single bedrooms with a bathroom and partial kitchen. A full kitchen will be included as a shared amenity between structures.

Landis said the 250 square-foot units will likely rent for around $600 a month, a price that would include utilities. The property is owned by Jerry Dirnberger.

“This has been a passion project of his for many years,” said Landis. “We’ve been working on it with him for the last two and a half years, but I think it’s been in his head for some time. He’s retired now, but I think this is his way of making a contribution to the neighborhood.”

As part of the project, the Missoula Redevelopment Agency will provide $96,000 in tax increment financing from the North Reserve-Scott Street Urban Renewal District. The funds will go toward public improvements in the right-of-way, including sidewalks where no sidewalks currently exist.

Tod Gass with MRA said the $3.5 million project is being financed through City Financial Investment Co. in combination with First Interstate Bank, along with owner equity, which represents 20% of project financing.

“MRA has been promoting higher density living close to the urban core for many years,” said Gass. “The investment in this property through owner equity and available financing, along with the TIF assistance for the public improvements, allow this project and others like it to be economically and financially feasible.”

Ponderosa Village is expected to open in June 2021, placing it on the tax rolls the following year. The property currently generates $3,000 in property taxes, though that’s expected to increase to $33,000 once the facility opens.

“That equates to a three to four year payback in the TIF assistance related to the public improvements,” said Gass. “Generally, a payback of 10 years or less is considered a good use of TIF funds.”

The development may set a trend in providing affordable housing in Missoula which, like other markets in the West, faces high land and construction costs and a lack of attainable housing.

“It creates the opportunity to develop attainable housing for the local workforce,” said Gass. “It’ll transform a former light industrial commercial site into higher density residential use, something more typical of an urban neighborhood downtown.”