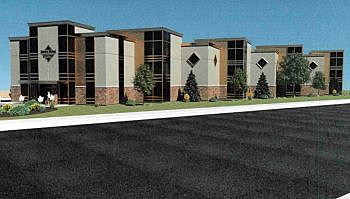 A residential storage warehouse planned at the intersection of River Road and Reserve Street won preliminary approval Wednesday from members of the Missoula City Council, though access remained a concern.

Proposed for a vacant lot, the project would include 440 storage units in 59,000 square feet of space across three floors, including offices. It complies with city zoning and adheres to new design standards, winning praise from the council.

“This is our first design excellence project that’s come before this body for a storage facility,” said council member Heather Harp. “That’s incredibly unique, and I applaud you for doing it.”

But the project did raise some concerns over access, which proved to be an engineering challenge given the property’s corner location off Reserve Street.

As proposed, access to the property is only permitted off River Road, and even that is restricted to a right turn into the facility and a right turn out. Motorists traveling west on River Road will not be able to access the property by making a left-hand turn.

“When we looked at this site plan, that’s all we looked at was right in and right out,” said Troy Monroe, assistant city engineer. “That’s all we’d be approving. When we analyzed this to begin with, a left turn off River Road is so close the to stop sign (on Reserve Street), it would change the level of service on River Road.”

The Getz’s believe the facility will help fill the city’s demand for residential storage and would generate only 26 vehicle trips per day, though city estimates place the number of trips a 78. The developers have reached an agreement with a neighboring property owner to provide an exit-only easement from the facility onto Davis Street.

That easement cannot be changed to two-way traffic, they said.

“To make this accessible off just Davis Street would mean redesigning the entire project,” said Jay Getz. “Right now, we don’t have an agreement with the neighboring property to make that an in and out, just an out. The lot is a difficult lot to develop.”

Jay Kirby, a project representative with Jay Kirby and Associates Architecture, said the development team believed they’d be granted left-turn access off River Road when designing the warehouse. It came as a surprise when that access was denied.

Mary McCrea, a senior planner with the city, said Development Services could look at conditioning the project to include an entrance off of Davis Street.

“I know the easement the applicant has obtained from the adjacent property is for exit only,” said McCrea. “Perhaps they can do some research on whether that property owner would permit an entrance and exit prior to the public hearing on Monday.”

The council will vote on the project at Monday night’s City Council meeting.