Missoula County on Thursday detailed the factors that led a working group to prioritize certain projects within the Mullan corridor, including funding, permitting and the time they have to bring the work to completion under federal constraints.

At some point, commissioners said, all projects identified as part of the Mullan BUILD project will get completed, and they’re putting hope in a second grant application which they approved for submission on Thursday morning.

For now, at least, some projects identified for the area will soon begin with the $13 million grant the county received last year.

“If we don’t get it done within a certain time frame, we have to pay the money back,” said Commissioner Josh Slotnick. “This is all about risk versus time. Our goal is to be successful with the second round of BUILD. Not only does it provide more money, it provides more time.”

It also includes the extension of England Boulevard to the west along with stream and trail work, including the realignment of Grant Creek, the extension of Milwaukee Trail, Tipperary Way Trail, and Flynn Lane and Mullan trails.

The county applied for $23 million but has only received $13 million.

“Things that don’t get prioritized or fall to the bottom of the list doesn’t mean it will never be built,” said Slotnick. “It will have to be included in our second BUILD grant, or some other source of funding.”

Shane Stack, the county’s director of Public Works, said the 10 elements identified as part of the overall project each have merit, though some scored higher than others based on a number of prerequisites and constraints.

They included independent utilities, right-of way limitations and permitting. Safety was given the greatest emphasis during the scoring process, followed by traffic congestion and access to land for economic development.

“We know there’s development in this area right now, there’s groundbreaking going on,” said Stack. “Knowing that, we’re going to score that a little higher. Which one of these elements has construction coming right now, in the future and maybe in the near future?” 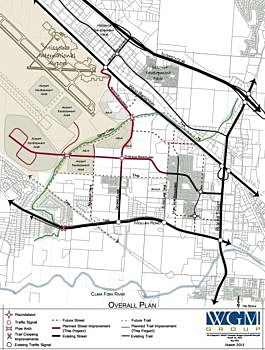 Pushing England Boulevard further west scored fifth, while the restoration of Grant Creek and its accompanying trail scored last. That will require environmental permitting, which could take longer than the current window allows.

“In this planning process, given the $13 million we have, simply because Grant Creek ranks No. 10 doesn’t mean that’s a low priority for us,” said Commissioner Dave Strohmaier. “In no way, shape or form does this reflect any lack of prioritizing of stream restoration. It’s something that will at some point in time get done. It’s just a matter of how we sequence all of this.”

While the scoring process is completed and approved, Stack said what gets built and when remains in flux. Each one of the 10 project elements will be moved to 30% design regardless, making them ready to commence once funding is identified.

“We’ll have a better idea where we can draw that line, which ones we think we can build and which ones won’t we build,” Stack said. “If we have enough money to build Mary Jane south and Mary Jane north and part of Tipperary Way Trail, but not enough to build Elmer Drive or England Boulevard, but maybe there’s enough to build Mullan Trail. With the money remaining, maybe number six gets built before four or five.”

A number of housing developments are poised to begin in the area, including Hellgate Meadows, which the Missoula City Council approved last year. The city is working with that developer and others in the area on road and trail improvements associated with their individual projects.