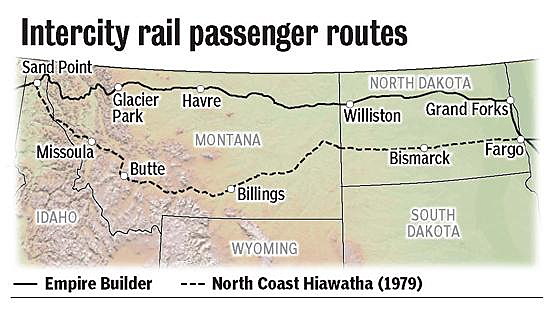 Three other Montana counties have joined Missoula in a push to restore passenger rail service across the state’s southern tier.

Last week, Commissioner Dave Strohmaier announced that Dawson County had opted to join the upstart Big Sky Passenger Rail Authority. Since then, both Sanders and Park counties have signed on, pushing the authority beyond the threshold of counties needed to create it.

“It’s very promising,” Strohmaier said on Monday. “I’m 99.9% confident that it’s going to happen. It’s just a matter of when, and I think the when will be in the month of July.”

Missoula County in early June adopted a draft resolution for the passenger rail authority. It sent the draft to the nearly two dozen counties poised along the old North Coast Hiawatha route once used by Amtrak.

Last week, Park County commissioners set a public hearing in their quest to join the authority, and Dawson County indicated earlier this month it intended to join. With Sanders County also on board, Strohmaier is now looking for any final members and will travel next week to Butte-Silver Bow County.

“I’m optimistic they will be the fifth, and I’ve heard indications that other counties are in discussion about this,” he said. “We’ll get the job done in July, and I’m confident the other counties will to.”

The rail authority would then be establish, it’s board members appointed and begin work to restore the southern route.

“The hangup right now – and it has been for years – is that Amtrak has no one to talk to in the state,” Strohmaier said. “This will create that governing structure, which will be the point of contact for our congressional delegation, for Amtrak, or for anyone else who wants to enter into a public-private partnership to get something like this going.”

Supporters of the Big Sky Passenger Rail Authority aim to further the economic prosperity of the region by advocating for rail as a means of public transportation.

Advocates note that similar rail authorities have shown success on the economic front, including the Southern Rail Commission across Alabama, Mississippi and Louisiana.

Amtrak ran the North Coast Hiawatha across Montana’s southern tier from 1971 to 1979. The route included Miles City, Billings, Livingston, Bozeman, Helena, Missoula and Paradise, among other communities. It originates in Chicago and ends in Sand Point, Idaho, where passengers could continue on to either Portland or Seattle.