At a time when businesses around the country have stalled, Nick Caras saw an opportunity for growth.

Bike & Type is a coworking space — a space for entrepreneurs to work independently alongside one another — built in the heart of downtown Missoula. Although the business only opened last week, it has had a positive response from a number of independent organizations.

Caras, president of Caras Real Estate, thought of building a coworking space long before the pandemic started, but he said “corona was the impetus.” After months of staying indoors, he believes people will want a place away from home to work from that doesn’t require a long term contract and isn’t as public as a coffee shop.

Located at 415 N. Higgins, the building that now houses Bike & Type has lived a wide variety of lives since its construction in 1911 — from a butcher shop to a furniture store. Caras has even found Sandborne insurance advertisements from the 20s that promoted commercial liquor and billiards on the property. While the building has lived a long life, years of neglect have led it into decrepitude.

However, over the last few weeks, Caras and his team have renovated the property to create a unique charm.

The original point of restoration, originally built as a chicken coop for the butcher’s shop, has a quiet coffee shop aesthetic with plenty of tables and chairs, fibernet internet and a mural of a man on a motorcycle running the length of a wall. Caras plans on partnering with a local coffee company to provide coffee and snacks for his tenants throughout the day. 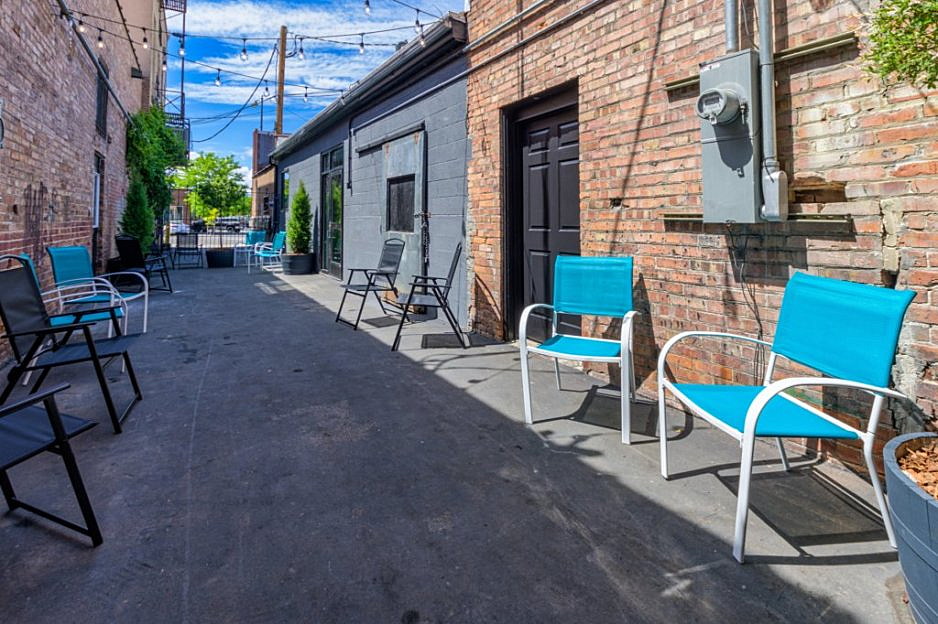 The alley that splits the old chicken coop from the main complex has had frequent problems with vandalism and drugs and alcohol abuse in recent years. Now the brick courtyard, adorned with a series of lightbulbs, lush plants, brightly painted patio chairs and Swedish window bars built in WWII, gives the alley a modern touch to its old European charm.

“I think what we took is a pretty ugly building … cleaned all the dirt and grime and old paint off the old brick here, brought in a bunch of plants from Caras Nursery, and now it’s a new space,” Caras said.

Although he’s renovated the property, he still tries to keep the history in every property he buys.

“I think the historic nature of the city is what makes it so special and what gives it so much character,” he said in one newspaper article. “I think it would be a mistake to lose that.”

Caras wants to continue working on the property while also completing Phase 2 by fall. The Phase II concept lives just a few blocks from Bike & Type at the Hammond Building. There, he plans to have tacos and beer, increased capacity for event space, and bike and kayak storage with showers.

Those who want to bike to work can do so while having safe space to store their bikes and avoid feeling sweaty at work.