(MTFP) HELENA — Despite an unemployment spike and an overall economic contraction, personal income in Montana has risen so far this year thanks to federal spending on coronavirus relief, according to a report published this week by Montana’s Legislative Fiscal Division.

During the second quarter of 2020, Montana’s unemployment rate is expected to peak at 11.7% and Gross State Product, the value of goods and services produced in the state, is expected to fall to 12.4% below a pre-pandemic projection, the legislative budget analysts write, citing proprietary data from financial information provider IHS Markit. Even so, with hundreds of millions of dollars in federal aid flowing to Montanans, estimated personal income for the quarter is up 3.9%.

The report also puts a number, albeit an uncertain one, to the pandemic crunch facing the state budget in the coming year. While state revenues look solid for fiscal year 2020, which concludes at the end of this month, the analysts say general fund revenues for fiscal year 2021, which runs from this July through June of next year, could fall by 12.8%.

The decrease would leave a $72 million hole in the two-fiscal-year state budget approved by Montana lawmakers during the 2019 legislative session, analysts say. However, the state’s rainy day reserve fund currently holds $118 million, and the analysts also project a sharp rebound for state revenues come 2022.

The unprecedented nature of the COVID-19 crisis makes it difficult for economists to project exactly what will happen with the state budget going forward. Complicating matters, the state’s largest revenue source, personal income taxes, can be challenging to predict even in routine times. 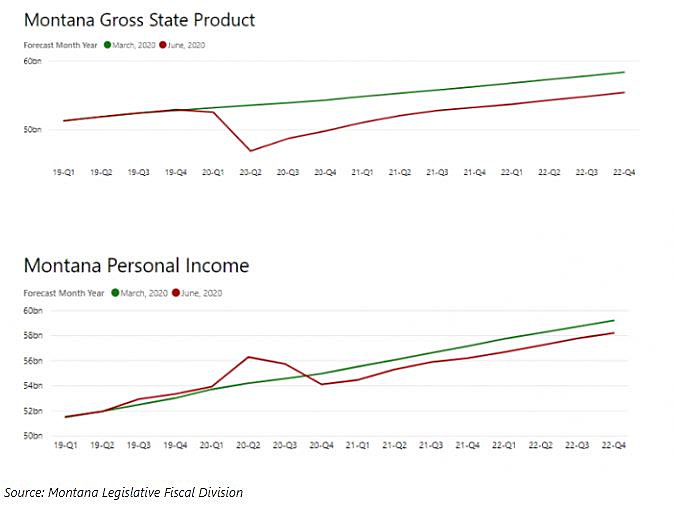 Legislative fiscal analysts say their current best estimate is that Montana will collect $1.2 billion in individual income taxes in fiscal year 2021, a 16.6% drop from expected 2020 collections, and well below the $1.4 billion used as a basis for the current state budget.

However, the analysts expect individual income tax collections to rebound in 2022, in large part because they think provisions in federal tax law will result in what will prove to be one-time hits to state collections in 2021.

For example, the federal Coronavirus Aid, Relief, and Economic Security (CARES) Act allows retirees to skip otherwise-required withdrawals from certain retirement accounts this calendar year, which analysts say could give wealthier retirees who don’t need the money immediately a way to reduce their taxable income for the 2021 tax season. The Legislative Fiscal Division estimates that provision will reduce state revenues by $20 million.

Analysts also flagged expected declines in other revenue sources, including oil and lodging taxes, which contribute smaller dollar amounts to state coffers but are routed to specific purposes.

Lower gas prices, driven in part by the decline in travel during pandemic closures, appear to have already reduced oil production in Montana, analysts say. They expect fiscal year 2020 oil and natural gas tax collections to come in at $39 million, a 28.5% reduction from 2019. Since the state passes much of that revenue to local governments in oil- and gas-producing counties, that could leave holes in local government budgets.

Additionally, Montana’s lodging tax collections are expected to crater in fiscal year 2021, given COVID-19’s toll on travel, with the current projection of $11.9 million being less than half the bed tax amount collected in 2019. Among other uses, that money is allocated to tourism promotion through the Montana Department of Commerce.

Through the CARES Act, Montana was allocated $1.25 billion to use for coronavirus relief efforts, though language in the act likely prevents the state from using that money to patch up budget deficits created by lower-than-expected income tax collections. Bullock has used that money to set up state-administered business relief, housing assistance and social service grant programs. As of June 24, a dashboard indicated the state has spent $39.8 million on those programs, slightly more than 3% of the overall fund.

Legislative analysts also list nearly 60 other state programs they expect to receive money from the CARES Act and other coronavirus relief legislation already passed by U.S. Congress. That includes extra federal support for Montana’s Medicaid program, as well as for the state unemployment insurance program, which paid out $586 million in unemployment benefits to Montanans between March 12 and June 16.

About three-quarters of that was federal money, including the CARES Act program that is providing some workers an additional $600 a week in pandemic unemployment compensation through the end of July.