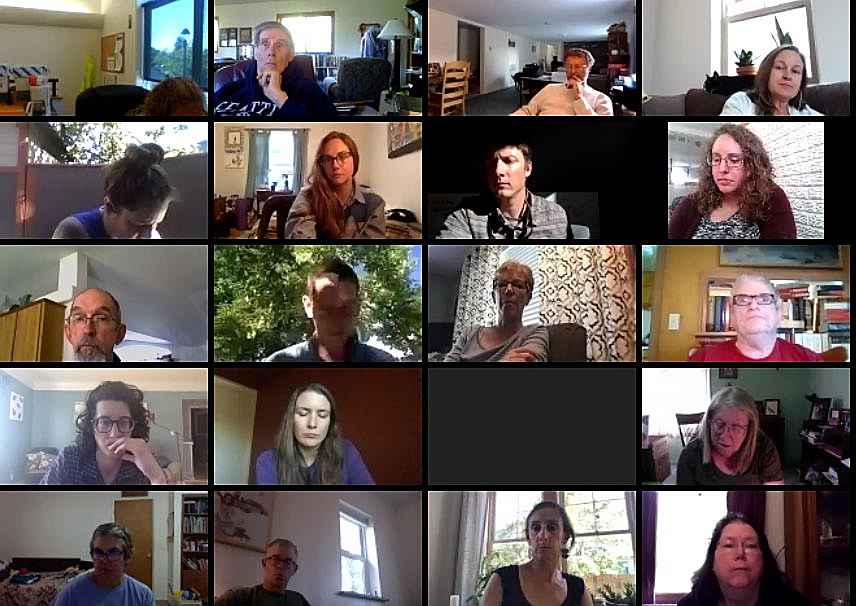 More than 200 people representing dozens of nonprofit organizations in Missoula gathered over Zoom this week to discuss housing affordability in Missoula.

The event, organized by Common Good Missoula – a project of the Missoula Interfaith Collaborative – marked the second session in the Voices 4 Housing series. The first took place in the spring of 2019.

Attendees ranged from solo Zoomers staring into their computer screens to socially distanced viewers at Imagine Nation Brewing and Burns Street Community Center. Ruth Guthrie, an organizer for the Missoula Interfaith Collaborative, said participants gathered “to discuss housing that people can afford in our community, the challenges and complexities of securing equitable and accessible housing, and how to build solutions.”

Yet the organizers took a distinctly intersectional lens, underlining the ways they believe race and class intersect to produce housing and net worth disparities.

“Structural inequalities present obstacles to people of color that are built right into our social systems and support white privilege,” Guthrie said. “We want to understand these extra challenges and take responsibility to find solutions. People of color are already doing this. The white people on this call must also take responsibility to dismantle white privilege.”

Josh Decker, an organizer for Western Montana Democratic Socialists, Rent Strike Missoula and the North Side West Side Crew, recalled the United Nations’ definition of housing as a human right, such that “everyone has the right to a standard of living adequate to the health and well-being of themselves and their family.”

He said the definition is different from how many view housing today: a means by which to create profit and an industry to invest in, an ideology that some believe fomented the 2008 financial crisis.

“This commodification and monetization of our human rights is what ultimately leads to the denial of those rights to any individual,” Decker said. “We have to first commit to viewing housing as a human right.”

Yet this human right has historically been denied to many by those in power, those on the panel said. SJ Howell and Ella Smith, the executive director and program director for Montana Women Vote, detailed policies that have formally and informally excluded black, indigenous and people of color from obtaining housing.

“Policies have been created over generations to maintain a power structure to keep those who are in power in power and keep the folks who are traditionally oppressed in those situations,” Smith said.

Smith and Howell went on to detail a few policies that exemplify this: the Indian Removal Act of 1830, when President Andrew Jackson forcibly removed indigenous people to give more land to white settlers. They also noted the Federal Housing Administration’s disproportionate lending to white homebuyers between 1934-1968, with only 2% of funds given to people of color.

These policies continue to forge disparities in home ownership: “BIPOC mortgage applicants are 60% more likely than white folks to be turned down for loan and pay higher rates even when they are approved,” Howell said.

These additional obstacles to owning a home create large disparities in net worth, with white people holding at least $100,000 more in median net worth than any population of color, they said.

Sam Duncan, a community organizer for the North Missoula Community Development Corporation and the Northside Westside group encouraged attendees to consider the distinction between the world they are living in, riddled with inequities and injustices, and their vision of an ideal world.

“I live in the heart of a Missoula neighborhood, across the street from the new library and the old library, and several years ago I watched as an entire city block of affordable housing was torn to the ground and dozens of people were evicted to construct the new library. Soon my roommates and I will all be evicted with only one month’s notice and no relocation assistance. My house is to be redeveloped into condos by the people who own our property and who think of it as an investment,” Duncan said.

“In these moments I’m in both the world as it is and the world as it should be. I know I might get an eviction notice any day and we all might lose our home, and I also know that it shouldn’t be this way for anybody.”

Duncan continued to situate the housing affordability crisis within Missoula. While the city’s median income for a two-person household is $56,000, making an affordable home $190,000, the median home sales price in Missoula is currently above $325,000, Duncan suggested.

Even more, while “53 percent of Missoulians are renters, 50% of those renters are cost burdened, meaning that their rent is more than 30% of their monthly income,” Duncan said.

Yet the organizers were careful to imbue a sense of optimism by underscoring the progress that can be accomplished by a group of thoughtful, committed citizens. The meeting broke into small group discussions twice: once to share experiences with securing housing in Missoula, then to brainstorm how housing would function in an ideal world and strategize what can be done to inch toward that vision.

Many envisioned simple but necessary fixes, such as more personable relationships between landlords and tenants, stable rent, and expansion of affordable housing in every new neighborhood.

Others imagined a world with more publicly owned housing and the decommodification of land and housing, made possible by community land trusts that take land off the speculative market. They said it’s not as radical as it seems — in Singapore, nearly 80% of people live in public housing.

While they aren’t there yet, there is cause for hope, they said. Common Good Missoula’s first housing discussion resulted in tangible changes to the city’s housing policy, moving the needle slightly closer to the world as they’d like it to be. These included solutions to renter barriers, such as a centralized credit and background check system, expanded access to legal assistance for tenants, and the creation of a landlord liaison position – a resource for landlords interested in renting to people with perceived high obstacles to renting.

The position is currently held by Alex Ramsing.

Yet while this progress should not be dismissed, they believe there’s more work to do.

“Together we’re not powerless. And the problem is not personal, it’s not my fault or your fault, it’s systemic. It’s the result of laws and ordinances, and funding by the few, and these things are not permanent. They are changeable if we act together with power,” Duncan said.