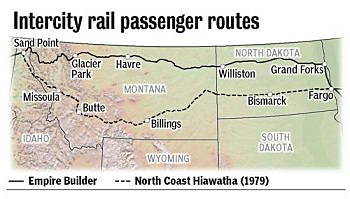 A resolution creating the Big Sky Passenger Rail Authority will include 11 founding members when it goes to a vote in the coming weeks, representing nearly half the counties poised along the former route across Montana’s southern tier.

Each of the 11 counties – a figure that surpasses early expectations – will now hold individual public hearings before adopting the resolution, making the rail authority official. Once each county adopts the resolution, they will appoint a member to the authority’s board, and the board will get to work on taking steps in its push to restore passenger rail.

“As soon as we have those names, we will schedule an initial board meeting of the authority, at which point the authority’s directors will select officers and determine next steps,” said Missoula County Commissioner Dave Strohmaier.

Missoula County will hold its hearing later this month.

Led by Strohmaier, Missoula County adopted a draft resolution in April and shopped the idea to the nearly two dozen counties poised along the old North Coast Haiwatha passenger rail route operated by Amtrak up until 1979.

Dawson County was the first to express interest, followed by Sanders and Park counties. Broadwater County soon followed, as did Carbon, Big Horn, Prairie and Wibaux counties. Gallatin County jumped on board in early July, as did Butte-Silver Bow.

“We simplified the language of the previous resolution into a Joint Resolution, which is the one document required by law that counties adopt,” Strohmaier said. “The specific details of operation of the authority will be decided by the authority’s board.”

Strohmaier began spearheading the effort last winter, and interest in passenger rail has spread across much of southern Montana and neighboring states, including the city of Boise. Advocates contend that the initial infrastructure costs could be recovered in economic and other public benefits.

Several passenger rail groups with ties to Washington, D.C., also are watching the effort, along with a growing number of advocates from across the Pacific Northwest and Northern Rockies.

Among other things, restoring passenger rail will serve as “a means to further the health, safety, welfare and economic prosperity of the region by advocating for rail as a public transportation option,” the pending resolution states.

History points to past successes, when burgeoning cities across the West once lobbied for the placement of railroads and interstates through their communities, citing their potential economic benefits. Advocates of the Big Sky Passenger Rail Authority also see a potential boon in restoring passenger service to southern Montana, which is where most of the state’s population lies.

“We believe that restoring passenger rail service to the southern tier of the state would be a transformative project for Montana,” stated a June letter to the state’s U.S. Senators.

That letter, sent by Missoula County, asked Sens. Jon Tester and Steve Daines to take an active role in writing portions of the surface transportation bill related to rail and ensure it included the Pacific Northwest and Northern Rockies region.