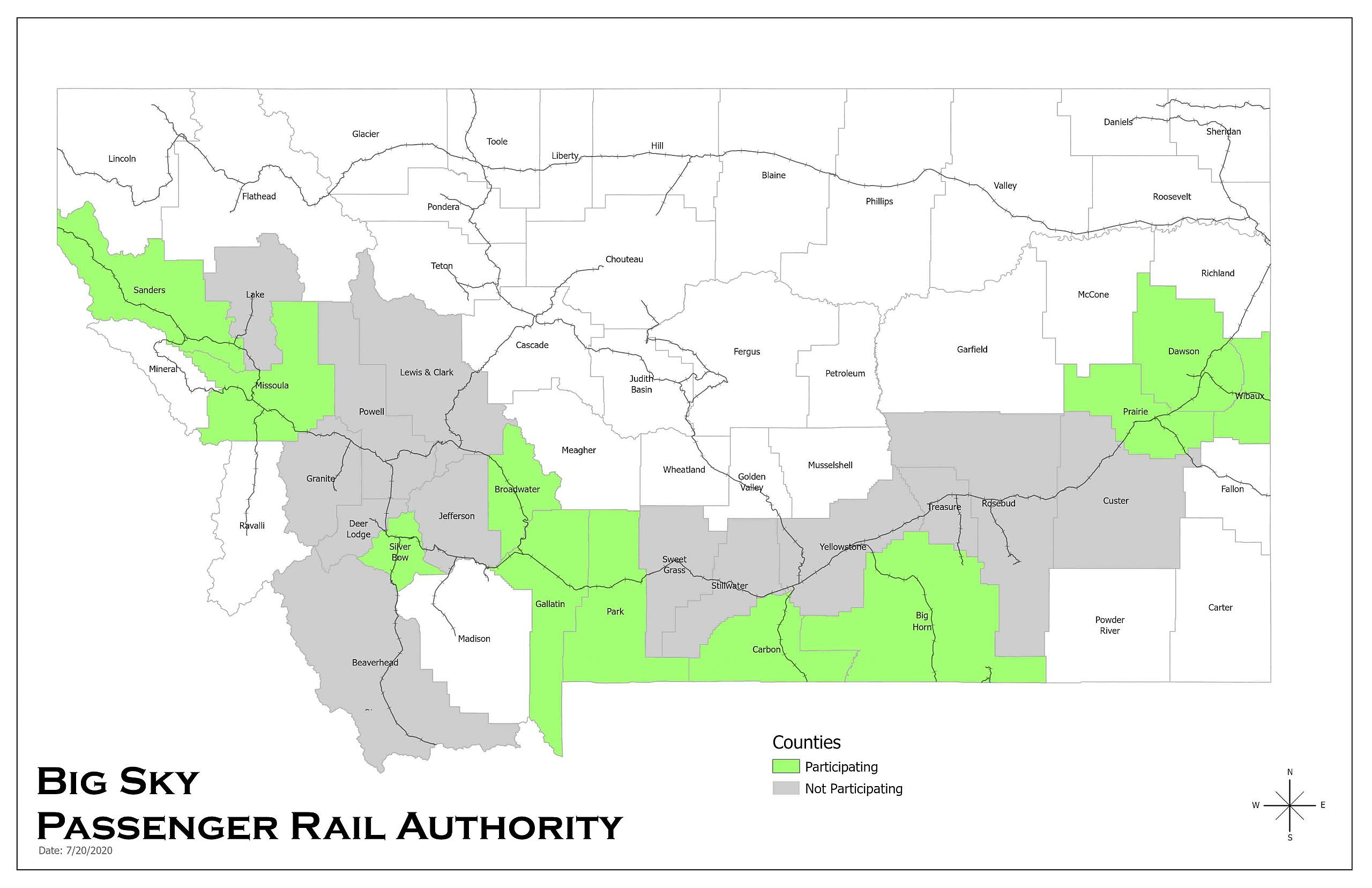 Late last year, Missoula County Commissioner Dave Strohmaier sat in a coffee shop with a view of the downtown rail yard to contemplate the task he had before him.

It would involve uniting more than a dozen Montana counties behind a common vision to restore passenger rail service along the North Coast Hiawatha route vacated by Amtrack more than 40 years ago. It would also require support from the state’s congressional delegation and a review of state laws guiding the creation of an authority that doesn’t exist.

Nine month’s later, Strohmaier has accomplished the task, but the work is far from over.

“On the one hand, it has been a short amount of time but on the other hand, it’s been a long time in coming,” said Strohmaier. “I’m super pleased with the breadth of representation we’ve gotten on that authority so far.”

Gallatin and Missoula counties have both adopted the joint resolution to establish the Big Sky Passenger Rail Authority, and two is all that’s required under state law.

But another 10 Montana counties have signaled their intent to join, and Strohmaier is eagerly awaiting their vote. Several are expected to make their participation official in the coming weeks.

“It’s clearly not a matter of if, but when the authority is officially constituted,” said Strohmaier. “We’ve got a couple urban counties, some intermediate counties and some very rural counties spanning from the Idaho border to the North Dakota border 600 miles away. While there are other counties we hope to pick up in time, I’m thrilled with the geographic and demographic representation we have.”

Missoula County crafted a draft resolution earlier this year and began shopping it around to test the interest of other counties and their willingness to establish a rail authority charged with restoring passenger service across Montana’s southern tier.

Strohmaier expected several urban counties to jump aboard, including Yellowstone and Lewis and Clark, but neither have. Instead, a number of rural counties have joined the endeavor, the first being Dawson County in eastern Montana.

Sanders, Park and Prairie counties soon followed, as did Broadwater, Jefferson and Butte Silver Bow. Their interest speaks to the state’s size and breadth, along with its changing economy, minimal infrastructure and aging demographics.

“We have no bus service and to travel by air, our constituents have to travel 175 miles to the nearest commercial flight airport,” the Prairie County Board of Commissioners wrote. “Because of less demand of coal, use of the southern line has dramatically reduced rail traffic, making room for other uses such as passenger train. Passenger train would be a huge asset to our elderly population for either points of final destination, or linking to other means of transportation.”

From a rural standpoint, advocates believe passenger rail could provide needed transportation to larger cities that sit miles away and perhaps provide some form of economic boost. The outlook is similar in the state’s more urban counties, where tourism, business connections and transportation options are vital.

Given the simplicity of establishing the rail authority and potential benefits of restoring service, Strohmaier said he was surprised that several urban counties opted to remain on the sideline, primarily Helena and Billings. They want to wait and see how the effort plays out, he said.

“What state law requires is simply that the county adopt the joint resolution and appoint someone to the board of directors, and that’s it,” Strohmaier said. “I would hope we could walk and chew gum at the same time and multi task. But I get it. This is something relatively new that counties by and large haven’t done in the past, and that means thinking about what we can do collectively beyond our boarders that has significant impact, not only across the state but in the counties we represent.”

While waiting for other counties to adopt the joint resolution, Strohmaier has created a punch list of next steps – drafting bylaws for the authority and scouting potential partners, including the Montana Department of Transportation and Amtrak.

Those behind the effort have also begun courting the state’s congressional delegation in hopes of winning support, and so far, it appears they may have it.

“I’ve received positive indications from our congressional delegation, particularly Sens. Jon Tester and Steve Daines,” Strohmaier said. “They’d be supportive of looking at using the surface transportation bill as a vehicle to incorporate legislation that would do some updated feasibility studies and perhaps create a multi-state rail commission.”

Missoula County in June asked the delegation to back elements of the federal surface transportation bill that could authorize five new rail commissions and create a federal working group to restore passenger rail service across the Northern Rockies.

The Southern Rail Commission was established by Congress in Louisiana, Mississippi and Alabama, and it’s often cited as a model to follow. It works across state lines to enhance and grow passenger rail in the southern region.

Those behind the Montana effort – which has since spread beyond the state – would like to see a similar commission established in the Pacific Northwest-Northern Rockies.

“The goal would be to loop in those states that would be part of this expanded rail network, and that would be Montana and Idaho, probably Oregon, Washington and North Dakota, but maybe also Utah, Colorado and Wyoming,” Strohmaier said. “I think there’s interest in Butte, Carbon and Big Horn counties in looking at what it would take to create north-south connections between Denver and Billings and Salt Lake (City) and Butte.”

The Carbon County Board of Commissioners noted its own interest in a southern route in a letter of support for the Big Sky Passenger Rail Authority.

“We are interested in the further investigation of the potential for a southern rail through Carbon County that would further connect Montana and our neighboring states to the south,” they wrote. “We appreciate there is no financial obligation to participate in this authority and look forward to being involved.”

Strohmaier agrees and often jokes that the train is leaving the station. He remains confident in the future but admits there’s much to do.

“The case I make to folks is that it’s all about positioning ourselves for the future,” he said. “If we don’t take some, what I think are fairly modest steps right now to create the foundation to build upon, it’s just going to continue four decades from now to be a self-fulfilling prophecy not to have passenger rail service.”