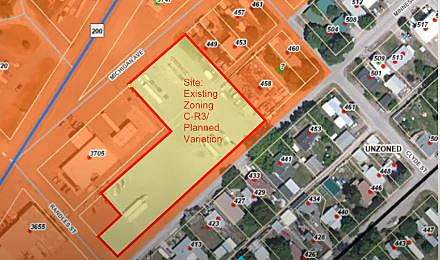 Missoula County commissioners this week reluctantly approved a resolution of intent to rezone 2 acres in East Missoula to accommodate what’s expected to be another storage unit on the town’s main corridor.

Details of the project aren’t yet firm and could change to something having more value to the community. But for now, representatives of Tri-East Inc. said the current vision includes a storage complex on the site, located at 3705 Highway 200.

“I don’t love storage units. I don’t know that anybody does,” said Paul Forsting, a land-use planner with Territorial Landworks. “But for whatever reason, they’re needed. We seem to have a demand for storage units.”

The East Missoula Community Council and planners with both the city and the county have held a vision to transform the Highway 200 corridor through East Missoula for years. The corridor currently offers an array of uses that have played out over time, leading a disorganized assembly of structures, roads and parking lots.

Several planning efforts are currently under way, including a redesign of the Highway 200 corridor and a zoning update that will likely strive for a more cohesive and walkable community.

The timing of the rezone request from Tri-West left commissioners frustrated.

“This falls into a category of the cart before the horse,” said Commissioner Dave Strohmaier. “I would love that we were standing here today having already updated the zoning code and the map amendments, zoning wise, in East Missoula, but that’s not where we are.”

With a new zoning map forthcoming, commissioners were reluctant to approve a zoning change now, knowing it may be out of sync with future plans for the community.

“What is being proposed, storage wise, probably does match to some extent the extremely eclectic character of the district,” Strohmaier said. “But what’s on the ground right now may not necessarily align with the vision for the core of East Missoula. There’s this issue of what the long-term vision is for East Missoula.”

Some community leaders have planned for a more vibrant and walkable community, one built around retail shops and housing opportunities. One storage complex already sits down the street, and placing another storage complex on the main corridor may leave the district with a more industrial aesthetic.

But commissioners said the zoning request does adhere to current county planning documents, dated as they may be. That left them few options to deny the request.

They ultimately approved the resolution on their intent to rezone on a 3-0 vote.

“The part that bums me out a little bit is not that the zoning is consistent, but the vision isn’t consistent, and the vision isn’t incorporated in zoning,” Commissioner Josh Slotnick said. “That’s sort of where the conflict is right now, the aesthetics of this specific use matching what the hope was when this zoning happened. But it doesn’t sound like we have much ground to stand on.”